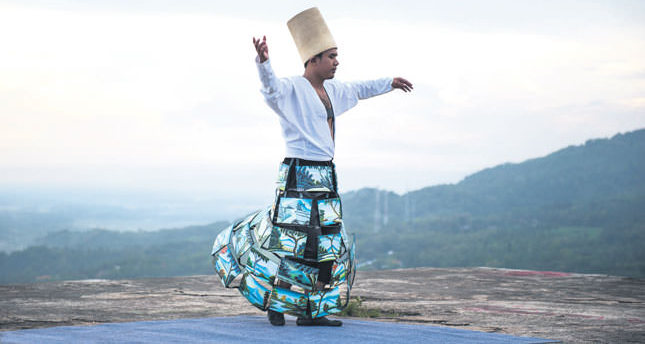 In the 1910s, the 6th Municipal District Office architect Petraki Meymaridis Efendi built an impressive building on İstiklal Avenue. It was christened Meymaret Han during the Republican Era. Last week, I found myself in the basement of this building where Araya Rasdjarmrearnsook's three-channel video, "Thai Medley" was shown in a dark room. The video was so impressive that I couldn't take my eyes off it. The Thai artist sings about love to unclaimed cadavers in a morgue. These are poor people, among the poorest in the country, and they lay there totally forgotten by the world. Apparently no one came to pay for their funeral. "The work attests to Araya's artistic commitment to the poor, the lonely and the voiceless." This is from the catalogue of "The Roving Eye: Contemporary Art From Southeast Asia," a group exhibition that runs until Jan. 4, 2015, in ARTER, the beautiful building that was once known as Meymaret Han.

The exhibition's curator, Iola Lenzi, is a researcher who focuses on Southeast Asian contemporary art. In an essay published in the exhibition book, Lenzi writes about how the label "southeast Asia" was produced only in recent times. The label's function is to force the observer to look at this geography in relation to other geo-political players. According to Lenzi, a new way of looking at the world has emerged in Southeast Asia from the 1970s onward. The 36 artists of "The Roving Eye" from Malaysia, Myanmar, Singapore, the Philippines, Thailand, Cambodia and Vietnam represent that new approach.

On display in the entrance floor is Lee Wen's "Ping-Pong Go Round," "a formal and conceptual subversion of ping-pong, played around a donut-shaped table instead of the standard rectangle." Numerous high school students seized paddles when I was visiting the exhibition last week. But their attempts at playing ping-pong at the heart of İstiklal Avenue failed. Lee Wen makes clear that it is the table that defines the game and one simply can't play ping-pong on a donut-shaped table, although it is fun to try.

FX Harsono's three-channel video, "Purification" looks at pluralism, religion and capitalism. The industrial setting of a factory, the political atmosphere of a demonstration and the ritualistic atmosphere of Muslims performing Islamic prayers are presented through a documentary framework which "encapsulates a busy, messy, culturally motional Indonesia that in its obliquely critical view of ideologies of purity, counters exclusion."

Tay Wei Leng's "Out of Place" series which focus on China's struggle to assimilate Hong Kong is timely, given that thousands of protestors have blocked Hong Kong's streets last week in order to voice their desire to democratically elect the city's leader. After Britain handed Hong Kong in 1997, China had guaranteed special freedoms for the city; pro-democracy activists demanded to elect their city's leader directly, rather than have Beijing appoint a politician. Tay Wei Leng's photographs follow the lives of educated migrants from China to capitalist Hong Kong who struggle "to reconcile their understanding of Chineseness with Hong Kong's seemingly foreign Chineseness." Another Hong Kong-related work is Vu Dan Tan's "Money" series. One of the most important artists in the contemporary Vietnamese art scene (he died in 2009) Vu Dan Tan uses Hong Kong dollars, among other national currencies, to "poke a sacred national institution from a host of vantage points." The radical subversion of various currencies result in a reconsideration of the very concept of national symbols and the ideology that lies behind them.

On the second floor there is a little room designed by the Singapore based artist collective Vertical Submarine. A wooden desk, a desk lamp and a book are among the few objects placed in the "Mirrors and Copulation" project. On the face of it, a mirror is hung on the wall on the right: when I looked at it, I saw the mirror-image of the room I was in. But there was a problem. My own image did not appear on the mirror. How could that be? As I double checked whether the mirror was genuine and reflected everything in the room, I was even more confused. The solution of this riddle is a simple one. The mirror is an illusion: there is another room adjacent to the one I was standing in. What I thought as a mirror was in fact a little window that showed the other room where all the objects of the first room were carefully placed to create the illusion of a mirror image. This playful and cunning idea stayed with me as I left the ARTER building and walked among the crowds in İstiklal Avenue.