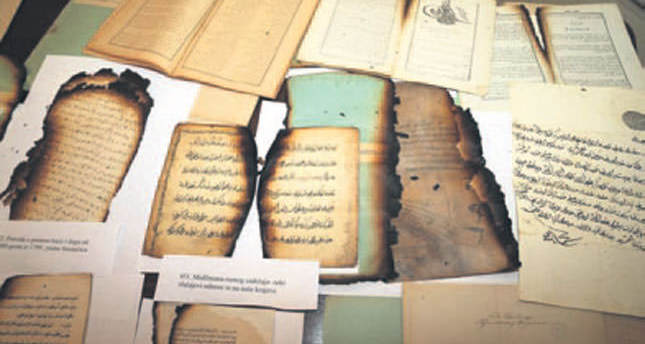 by Daily Sabah Oct 08, 2014 12:00 am
The Turkish Cooperation and Coordination Agency (TİKA) repaired and reopened the state archives section of the building of the Presidency of Bosnia and Herzegovina, which was set on fire during protests in February. TİKA allocated 150,000 euros (TL 429,970) to preserve the remaining documents in the archive, which contain a lot of national history, and renew the section . Bakir Izetbegovic, the Bozniak member of the Presidency of Bosnia and Herzegovina, vice president of TİKA Ali Maskan, Turkey's Ambassador to Sarajevo Cihad Erginay and many other guests attended the reopening ceremony in Sarajevo. Izetbegovic, in his speech at the ceremony, recalled his distress when the young people of Sarajevo were sent to destroy their own symbols, flags and cultural heritage. He also said that Feb. 7, the day the building of the Presidency of Bosnia and Herzegovina was set on fire, was one of the most devastating days of their history. "To see such destruction was hard for people who witnessed terrible outcomes of the siege of Sarajevo and love Bosnia and Herzegovina," Izetbegovic said, adding that even then he knew the people of the city would prevail. He emphasized that the citizens of Sarajevo showed their rage quietly and with tears.

The Bosniak member of the Presidency of Bosnia and Herzegovina said they learned lessons from the unrest in February and emphasized that the people of Bosnia and Herzegovina are free and democratic. "We are a free, open-minded and democratic society. Our citizens have the right to give voice to their dissatisfactions through peaceful protests," Izetbegovic said. He also said that nobody has the right to engage in violence, as chaos and violence do not generate solutions. "The only way to overcome differences and problems is through democratic methods and government agencies. If the country is in need of change, necessary actions will be taken through democratic elections in a peaceful and civil atmosphere," he said, adding that there are government agencies that are responsible for making people obey the constitution and laws, and everybody should respect the decision of the people of Bosnia and Herzegovina after the elections. He further thanked the Republic of Turkey and TİKA for their contribution to reopening the state archives. Maskan said Turkey and Bosnia and Herzegovina share a common history, and said the recovery of the state archives is essential for Turkey. "We know very well that a nation without a past has no future. Therefore, the archives are not only important for Bosnia and Herzegovina but for the whole world," Maskan said. He also said that TİKA has undertaken the restorations of several historical and cultural artifacts and buildings in Bosnia and Herzegovina belonging to the Ottoman Empire.

Turkey's Ambassador to Sarajevo, Cihad Erginay, also drew attention to the importance of the preservation of the State Archives, as it is a way to protect and preserve historical evidence. He said Turkey wants to help Bosnia and Herzegovina through TİKA, and added, "I believe that people will work productively in the new State Archives building as the working conditions are improved. We hope that the Republic of Turkey will never be in need of these kinds of renovations." Dusan Vrjina, manager of the Bosnia and Herzegovina State Archives, thanked everyone who contributed to the renovation, and said that a part of Bosnia and Herzegovina's cultural and historical riches has been saved. He reminded that TİKA was one of the first foreign foundations to bear a hand to their country after the unrest in February. "TİKA representatives came to the building right after the fire. They offered to help and renew the state archives section of the presidency building," Vrjina concluded.