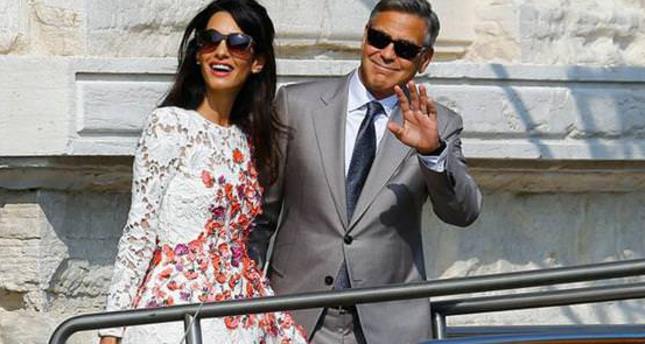 by Daily Sabah with Agencies Oct 14, 2014 12:00 am
Human rights lawyer Amal Alamuddin Clooney, fresh from her marriage to Hollywood heart-throb George Clooney last month, is heading to Athens to advise the Greek government in its battle to repatriate the ancient Elgin Marbles statues from Britain. The Lebanese-born Alamuddin, who married Clooney in a star-studded ceremony in Venice, will meet Greece's Prime Minister Antonis Samaras and Culture Minister Konstantinos Tasoulas alongside her boss Geoffrey Robertson, their Doughty Street Chambers said on Thursday. 'Mr Robertson and Mrs Clooney were first asked to provide legal advice to the Greek government on this matter in 2011. They will be holding a series of meetings with government officials during their stay," the chambers added in a statement. The pair will be in Athens from Oct. 13 to 16. The Marbles are a set of ancient Greek sculptures taken to London after being removed from the Acropolis in Athens by a British aristocrat, Lord Elgin, while Athens was under Ottoman control in the 19th Century. Greece has sought their return from the British Museum for decades, to no avail. In March, George Clooney backed their return to Greece while promoting his film "The Monuments Men." The Trustees of the British Museum maintain that the marbles legally belong to the museum. Greece says it is no longer an issue of ownership and that it would accept them back as a permanent loan. To do so, the Greek government would first have to relinquish its claim to them, the British Museum says. Alamuddin Clooney, who is based in Britain, has represented Ukrainian former Prime Minister Yulia Tymoshenko at the European Court of Human Rights and WikiLeaks founder Julian Assange in extradition proceedings. She also advised former United NationsSecretary General Kofi Annan on the conflict in Syria. In recent years, Turkey has been making aggressive efforts to retrieve historical artifacts originally belonging to Turkey on display in European museums. The Turkish Ministry of Culture has had success in re-appropriating some of them however, there are still many artifacts waiting to be returned to their original home - Turkey. The Greek case, being undertaken by Alamouddin, is a significant one and Turkey has been keeping a close watch on it. Alamouddin may end up setting an example and inspiring hope for the return of many smuggled Turkish artifacts.