Heracles sarcophagus found to have a twin in Perga 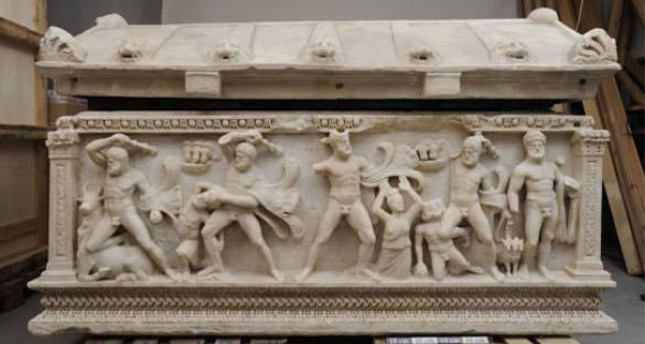 by Daily Sabah Oct 20, 2014 12:00 am
Officials have confirmed that one of the pair of sarcophagi featuring the ancient Greek divine hero Heracles was registered at the Geneva-based Phoenix Ancient Art Gallery, with the other being displayed at Perga Museum in Antalya.

The figures on the sarcophagi are almost the same as the other artifacts in the gallery. An expert team from Turkey was sent to Swiss customs in Geneva, where the sarcophagus was seized. Following investigations, it was discovered that the sarcophagus was smuggled out of Perga and a case was opened against the art gallery.

Turkey's Culture and Tourism Ministry is continuing legal proceedings to recover the artifact. The necropolis within the borders of the ancient city of Perga was private property for many years and was expropriated last year. Before the expropriation process, land owners and treasure hunters carried out illegal excavations and smuggled away one of the sarcophagi. The land owner, who is currently imprisoned in Antalya's Elmalı Prison, confessed that his uncle sold a sarcophagus to him in 2001. During the illegal excavations, some of the sarcophagi were either damaged or smuggled. The sarcophagus is on display in Antalya Museum with a statement that the other one in Geneva should be returned.