Turkey partners with Qatar in culture, arts and heritage 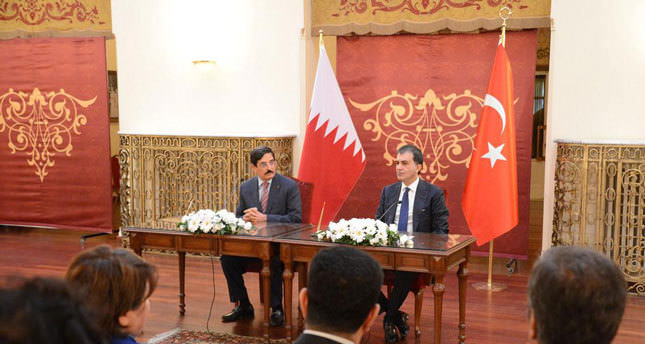 by Daily Sabah Oct 29, 2014 12:00 am
Turkish minister of culture and tourism, Ömer Çelik, and Qatari minister of culture, arts and heritage, Hamad bin Abdulaziz al-Kuwari, signed a cultural partnership declaration of intent regarding partnership for the 2015 Year of Culture project following their meeting at the Ankara Palace. Çelik mentioned the 500-year-old history and brotherhood between Qatar and Turkey, adding that the two countries have a good economic and political relationship. Çelik announced that 2015 will be the Year of Culture between Turkey and Qatar and noted that from now on, cultural relationships between the two countries will deepen. He said, "We commence the process with the signing of a declaration of intent and henceforth the cultural ties between Qatar and Turkey will get stronger." He said Qatar and Turkey started their cultural relationships with the signing and reported that a Yunus Emre Culture Center might be opened in Doha, Qatar in the future as part of the agreement.

"Qatar is one of the countries with which we have a perfect relationship," Çelik said adding, the only missing piece to this perfect relationship is cultural ties. He said with the agreement between President Recep Tayyip Erdoğan and the Emir of Qatar Hamad bin Khalifa al-Thani along with the Year of Culture project, the cultural relationship between the two countries will flourish. "Now, we officially start the process via the declaration of intention," Çelik added. He continued, "We will talk about what we will do next today in length and breadth and we will go into detail during my visit to Qatar. I welcome the honorable minister once more. God willing, this signing will pave the way to good things." After the press meeting, Çelik held a lunch in the honor of Kuwari with the attendance of Turkey's minister of foreign affairs, Mevlüt Çavuşoğlu.