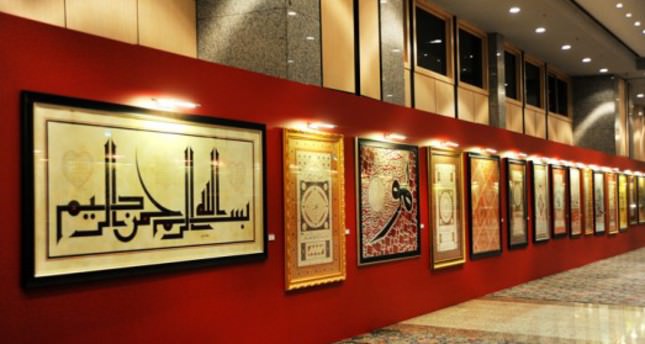 by Daily Sabah Nov 03, 2014 12:00 am
A new Islamic calligraphy exhibition commemorating the 1443rd year of Prophet Muhammad's birth opened in Washington on Friday.
Islamic Culture and Art Platform, in cooperation with Yıldız Holding, a Turkish multinational, and the Turkish Cooperation and Coordination Agency (TİKA), exhibited pieces by famous calligraphers. They include verses from the Quran, traditions of Prophet Muhammad (hadith in Arabic) and tablets on which the prophet is described (hilya sharif in Arabic).

The Turkish Foreign Ministry and Turken Foundation also contributed to the "Love for the Prophet" exhibition. At the opening reception, Turkish ambassador to Washington, Serdar Kılıç, expressed the importance of hosting the masterpieces at the embassy. This exhibition is quite meaningful and launched timely in terms of telling what Islam represents via the Quranic verses and deeds of our prophet, while Islam and its values is [sic] abused and misinterpreted in the world, particularly the Middle East," he said.

The exhibition was also launched in New York last month and Kılıç thanked the Turken Foundation and TİKA for their contributions.
Kılıç also said that in the coming weeks the embassy will host a new exhibition titled "Turkey: The safe port" that will tell the story of people fleeing to Turkey and the Ottoman Empire from their lands where they were oppressed or witnessed wars. The efforts of Turkey in hosting refugees, particularly more than 1 million Syrian refugees, has not been sufficiently appreciated, he said, and added that the upcoming exhibition will serve this purpose. "Turkey's efforts do not take place sufficiently in American press. Turkey hosts 1.6 million refugees for which $4.6 billion in resource has been allocated," Kılıç said.

Noting that Europe has hosted 124,000 Syrian refugees, Kılıç said Turkey, despite the heavy burden, has received just $150 million dollars of assistance from the international community. The exhibition is open to visitors until Nov. 21 at the embassy's chancellery.