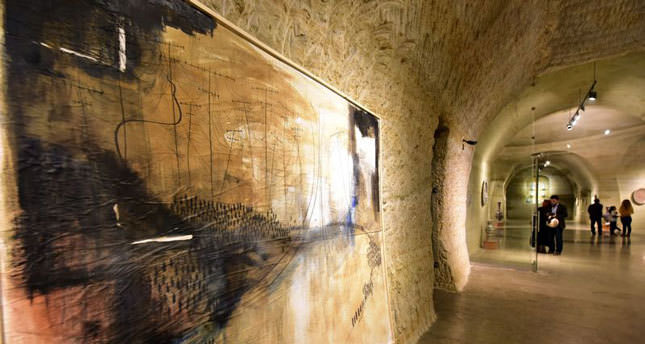 by AA Nov 04, 2014 12:00 am
Foreign visitors are flooding to the "Anatomy of the Individual" art exhibition at the Ceramic Museum in Avanos, where the work of Hatice Abalı has caught the eye. Having hosted various art and photography exhibitions, the carved rock museum has seen a new wave of people coming through the door with visitors looking at Abalı's representations of a lonely modern world.

Speaking to AA, Abalı said "individuals continously share and communicate with each other in the cyberworld, but when they are put together in person they cannot communicate. They still communicate in their cyberworld and this makes them lonely." Abalı said she tried to picture and represent the individualistic attitudes people have in their lives in her art. "In my works, I tried to create the lampposts dividing the skyline using rough, perpendicular and horizontal lines, while using the rhythm of successive textures to create the circular apartments surrounding the figures, thus creating a spatial relationship. "I used human figures in the form of silhouettes or shadows as well as using spotty and figurative elements together that thereby create an imaginary and unreal world."

Abalı claims that the exhibiton has gained attention in academic circles, and added, "I have been receiving emails. I have received an invitation from Germany. I am planning to go and hold an exhibition there." Consisting of 15 pictures, the exhibiton will be open until Nov. 7.