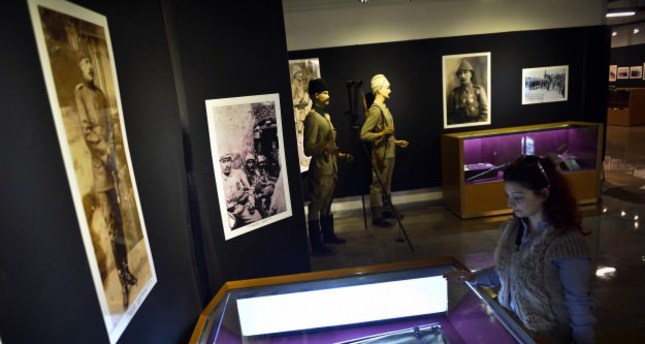 by AA
Nov 09, 2014 12:00 am
An exhibition on World War I, one of the bloodiest wars in world history, opened in Istanbul last week, marking the centennial commemorations of the start of the global conflict. Organized by the Turkish Armed Forces' Military Museum and Cultural Site Command in the Harbiye district of Istanbul, the exhibition tells the story of World War I, which began on July 28, 1914 and lasted until Nov. 11, 1918.

More specifically, the exhibition focuses on the involvement of the Ottoman forces, which entered the war in November of 1914. "As it has been 100 years since the beginning of World War I, we wanted to bring the significance of the war to light," Metin Anahtarcıoğlu, Instructor Colonel and the director of the Military Museum in Istanbul, told Anadolu Agency. Visitors to the exhibition will find a number of authentic objects, including hats, some of which still bear the signatures of prominent commanders. Among other artifacts featured are an iron cannon made by the Ottomans in 1868, a German machine gun, an English rifle, a French telescope, knives captured from Indians, spoons and forks used by high ranking Turkish officers and samples of soldiers and officers' uniforms. One of the highlights of the exhibition is peculiar - a piece of dried bread.

"The bread is one of the dearest things in this exhibition," Anahtarcıoglu said. "Bread was being dried so that soldiers could eat them for longer times under warfare conditions." The exhibition also showcases photographs of the Great War. One of the pictures shows a group of Ottoman soldiers praying at the Syria-Palestine-Canal front, one of the Ottoman fronts during the war. The exhibition in Harbiye district of Istanbul is open every day until April 30, 2015. The colonel said the aim of the exhibition could be summarized in a quote from Mustafa Kemal Atatürk, founder of the Turkish Republic: "As the Turkish child gets to know his ancestors better, he will find the strength in himself to accomplish greater tasks."