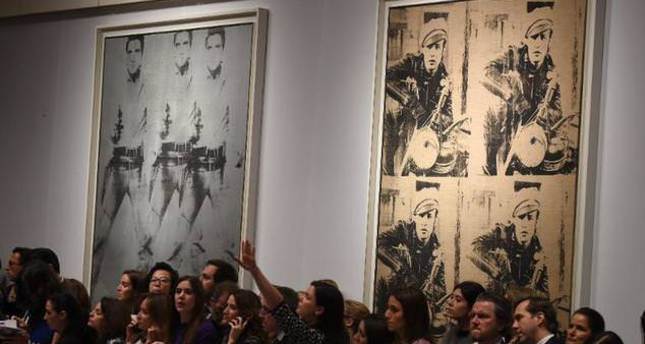 by French Press Agency - AFP
Nov 15, 2014 12:00 am
Two iconic Andy Warhol paintings of Elvis Presley and Marlon Brando sold for more than $151 million at auction in New York, shattering pre-sale estimates by several million dollars. Andy Warhol's 1963 "Triple Elvis," a silkscreen depicting three images of "the King of Rock and Roll" posing as a cowboy, sold for $81.9 million at the Christie's sale. The striking 7-foot tall work, derived from a publicity still for the 1960 Don Siegel-directed Western "Flaming Star," was estimated to fetch $60 million. The final sale price was more than $20 million above the estimate after only 6 minutes of frenzied bidding. It was a similar story for the other Warhol classic "Four Marlons," a giant set of four images of the legendary actor, Marlon Brando, taken from his 1953 motorcycle gang classic, "The Wild One." Both of the auction prices were, however, well short of the all-time record for a Warhol work, set by "Silver Car Crash (Double Disaster)," which fetched $105.4 million in November last year at Sotheby's. A flurry of bids also greeted the sale of Cy Twombly's "Untitled" from his "Blackboard paintings," which went under the hammer for the first time. The painting, which involves a series of energetic spirals resembling chalk scribbles, sold for $69.6 million - the highest amount ever paid for a work by the American artist. Several world records were also set for other masterpieces, including $30.4 million for "Smash" by Ed Ruscha, regarded as one of the leaders of the American pop-art movement. American photographer Cindy Sherman, 60, also set a record with her "Untitled Film Stills," which fetched $6.8 million. Japanese artist Yayoi Kusama's "White No. 28" earned $7.1 million, smashing its sale estimate of between $1.5 million and $2 million. Revered British artist Francis Bacon's "Seated Figure" sold for $44.96 million in the lower range of price estimates set between $40 million and $60 million. A Bacon triptych, "Three Studies of Lucian Freud," sold for $142.4 million last year, the highest price ever paid for a work of art sold at auction, surpassing the previous high of $119.9 million raised for the fourth print of Edvard Munch's "The Scream," set in May 2012.