Solomon’s Pools: Built by a prophet, restored by a sultan 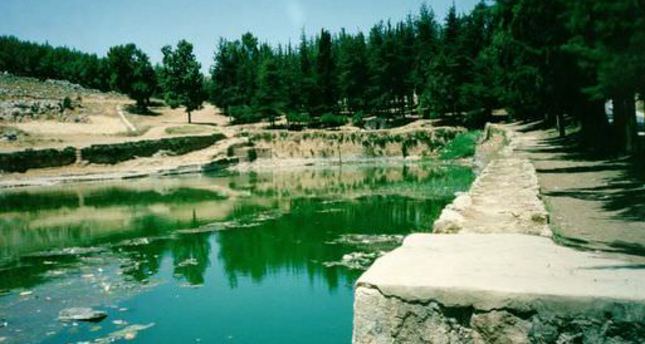 Located in the southern West Bank, Solomon’s Pools are thought to date back to the period of King Solomon, and the Ottoman Sultan Suleiman the Magnificent famously restored the pools in the 16th century

Solomon's Pools may have been built by Prophet Suleiman (Solomon) some 3,000 years ago in ancient Palestine, but some Palestinian archeologists believe the pools derived their name from an Ottoman king who restored them centuries later. "The pools were named for Ottoman Sultan Suleiman al-Kanuni [Suleiman the Magnificent], who renovated and expanded them," Palestinian archeologist Nour Taha told Anadolu Agency, in reference to the three ancient water cisterns in the village of Al-Kahder located some 5km south of Bethlehem in the Israeli-occupied West Bank. The Ottoman sultan restored the pools in 1536 and extended the aqueducts that supplied the walled city of Jerusalem with water. The pools were fed mainly by rainwater and two springs that no longer exist. "Sultan Suleiman knew Jerusalem received large numbers of religious pilgrims. So he restored the pools and opened two water aqueducts that stretched for more than 28km to the city," Taha told AA.

"The two channels were built with metal and stone to supply Jerusalem residents and pilgrims with water," he said. Taha explained that each of the pools is 110 meters long, 60 meters wide and 11 meters deep. Together, they can accommodate 160,000 cubic meters of water in the three vast cisterns. For hundreds of years, Solomon's Pools supplied visitors with fresh water. But due to negligence during the British mandate in Palestine (1923 - 1948) and under the subsequent Israeli occupation, much of its water was contaminated, eventually forcing the Palestinian Authority to drain them. Taha said remains of the ancient water aqueducts could still be seen in several places along the road linking modern Bethlehem to Jerusalem, especially near southern Bethlehem's historic Bilal bin Rabah Mosque, known to Jews as Rachel's Tomb.

According to the Bible, the pools were built by Solomon for his wives in 950 B.C. so they might bathe and enjoy the gardens therein. In 30 B.C., Herod the Great, king of Judea, a client Rome, used the water aqueducts to supply Jerusalem with water and laid 37 kilometers of pipe to bring water to his capital, Herodium. After that, the pools were neglected until Ottoman Sultan Suleiman al-Kanuni restored them and extended the water channels to Jerusalem.

In 1620, Ottoman Sultan Osman II built Al-Burk ("Pools") Castle nearby to protect the magnificent pools from perceived threats. "Sultan Osman II realized the importance of securing water supplies in central Palestine, so he built the castle to counter any threats," Taha told AA. "The castle is built on 2,000 square meters of land on the east side of the pools," he said. "Around 50 soldiers were stationed there to protect the area from thieves and bandits." The structure now serves as a national museum that houses more than 2,400 antiquities, Taha noted. Some 280 years later, Ottoman Sultan Abdul Hamid II gave his own touch to the area, building a new, 16km water pipeline to Jerusalem.

After the 1967 Arab-Israeli War, the self-proclaimed Jewish state occupied Jerusalem and the West Bank. Shortly afterward, Israel closed the aqueducts and the pools fell into neglect. After the 1995 Oslo Accords, the Palestinian Authority assumed control of the historic site, drained the pools, and turned the area into a national park. This has not, however, prevented Israeli settlers from repeatedly forcing their way into the site - which they consider a holy place built by Prophet Solomon - in order to perform Talmudic rituals. "Almost every week, hundreds of Jewish settlers force their way into the pools under Israeli army protection," Ahmad Ebidat, a Palestinian guard at the site, told AA. "They spend hours praying in the area, preventing Palestinian visitors and sightseers from entering it," Ebidat said.