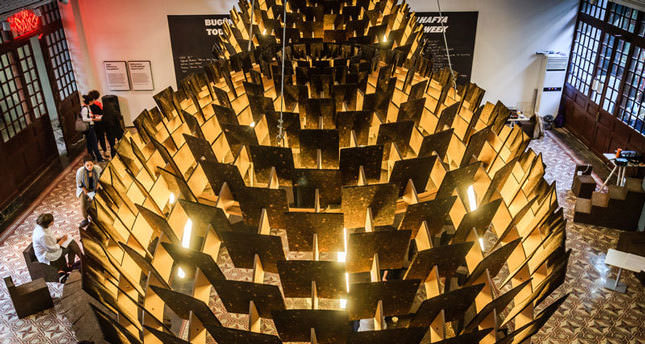 by daily sabah
Nov 19, 2014 12:00 am
Organized by the Istanbul Foundation for Culture and Arts (İKSV), the Second Istanbul Design Biennial is taking place at the Galata Greek Primary School and is free of charge. The Istanbul Design Biennial is sponsored by the Arçelik, Doğuş Group and Bilgili Holding, the ENKA Foundation and VitrA, and is curated by Zoe Ryan under the theme "The Future is Not What it Used to Be." Alongside the main exhibition, the second edition of the Istanbul Design Biennial is hosting various design-related events. Design TV reveals the exclusive backstage scene of the biennial through the interviews, including one with the event's curator. Ryan talked about how she created the exhibition and the team she worked with while designers and architects talk about their projects. Design TV broadcasts on İKSV's YouTube channel: www.youtube.com/user/iksvistanbul and website: 2tb.iksv.org. H. Cenk Dereli and Yelta Köm broadcast the latest news about the biennial, live street interviews and chat sessions on their radio program titled "Kontraakt."

They are broadcasting live at the Galata Greek Primary School every day until the end of the biennial. Every Tuesday at 10:00 a.m., Kontraakt discusses the weekly report of the biennial, the past events and the latest news about the design world. The radio program sometimes reaches its audience from public transportation while surprising the listeners with unexpected guests. In their second live broadcast, the Kontraakt team hosts well-known figures of the design world and they talk about the theme of the biennial and world agenda every Saturday at 5:00 p.m. Tomorrow, Kontraakt will host a 12-hour program titled "Design Marathon." During the program, groups composed of students and professionals will generate solutions to design problems.

After the program, which will allow listeners to contribute to the process as well, the works of the groups will find a place on the wall of Kontraakt. You can listen the live broadcast of Kontraakt at: http://2tb.iksv.org/program_yayinlar.asp. The child and youth workshops organized by İnformel Eğitim-çocukIstanbul will take place throughout the biennial under the title of "ECO-Design." The children and youth are working on new approaches to design that questions design's role in creating a livable and sustainable future. Workshops held on Sundays between 10:00 a.m. and 5:00 p.m. offer events that parents are able to attend alongside with their children. Moreover, workshops are available for preschool and first grade students on Sundays at 11:00 a.m and third and fourth grade students on Sundays at 2:00 p.m. For further information, you can e-mail: cocukatolyesi@iksv.org. The "Talk To Us" panel and chat sessions that are based on dialogue and exchanging views will also continue to be held at Galata Greek Primary School. Also, the event area of the Second Istanbul Design Biennial Antrepo 7 is hosting various workshops. In order to attend the events, you just need to make reservations via e-mail at: rezervasyon@iksv.org and wait for verification. All events and workshops are free of charge.

Moderator: Kerem Piker
During the panel session, guest speakers include Emre Arolat of EAA-Emre Arolat Architects and Saffet Kaya Bekiroğlu of ZHA-Zaha Hadid Architects who will discuss the future of architectural tools.

Films being screened at the biennial focus on the new approaches to living in the future. The film screenings are taking place every Thursday until the end of the biennial at Galata Greek Primary School and TAK Kadıköy. For further information, you can visit: 2tb.iksv.org.
'Re-Set: New Wings for Architecture' and 'Rosas danst Rosas'

"Re-Set: New Wings for Architecture" is a portrait on Petra Blaisse, the Dutch interior and landscape designer and his Amsterdam-based office, Outside. The installation was made for the 2012 Venice Architectural Biennial and employed the whole Dutch Pavilion. The graphic designs featured in the credits and titles are the same as those printed on the windows of Reitveld Pavillion, explaining the movements and positions of the curtain. Directed by Thierry de Mey, "Rosas danst Rosas" was shot at the old technical school of architecture in Leuven owned by Henry Van de Velde. In his film, de May films the four dancers who took place in the show in 1995 and 1996 along with all the performers featured in the show throughout its long history. As the building underwent renovations after the shooting, the audience witnesses the original architecture of it for the last time. The film was shown on all the major European TV channels and also claimed an important place in art circles.

When: Tomorrow at 7:30 p.m.
Where: Galata Greek Primary School

The workshop organized by designer Rianne Koens invites everybody to produce different designs for OTURA furniture designs. While practicing, participants will learn how to meet many domestic needs with apparently simple objects. Also, participants will get a chance to show creativity using the design application that was developed for OTURA.

The 2015 festival season preparations are being planned within the scope the Second Istanbul Design Biennial. One of the founders of Zebra Design Factory and founder of t.AG Brand Agency, Ali Güverin of Marmara University, will organize a workshop under the theme of music. The workshop will welcome young people who want to design custom-made boxes, and you can make reservations by sending an e-mail to: rezervasyon@iksv.org.