Documentary about Greek cemetery in Istanbul to be screened 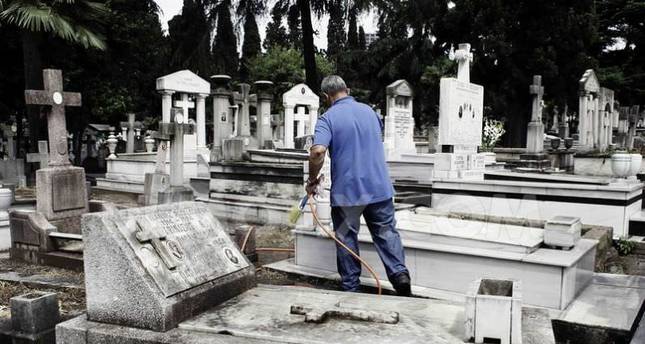 The Şİşlİ Greek Orthodox Cemetery, the biggest resting place of Orthodox Greeks in Istanbul, is the subject of a documentary that will debut at the Lütfi Kırdar International Convention and Congress Center on Friday, November 21.

The Ecumenical Patriarchate is organizing the film session, and the Beyoğlu Greek Society said that "Bu Dünyadan Göçenler, Yalnız Unutulduklarında Ölürler" (Those Who Depart This World Die Only When Forgotten) is directed by Angeliki Aristomenopoulou and written by Nikos Mihailidis. Mimi Plessa composed the documentary's soundtrack while Sia Kosioni narrates the film.

The cemetery is the burial ground of Greek scientists, artists, traders, bankers and members of prestigious Greek families such as Zarifi and Mavrokordatos. Archbishop Bartholomew I and the Beyoğlu Greek Society Foundation have been conducting a restoration project that includes the renovation of 40 Greek cemeteries that stand out with their artistic, historical and visual features.

Stonemasons from Greece and Turkey worked to remove the traces of the September events, which were the attacks directed at Istanbul's Greek minority on September 6-7, 1955, from the cemeteries. Most of the cemeteries have been renovated so far and the graves that feature artistic designs as well as those that belong to important Greeks were also recuperated.