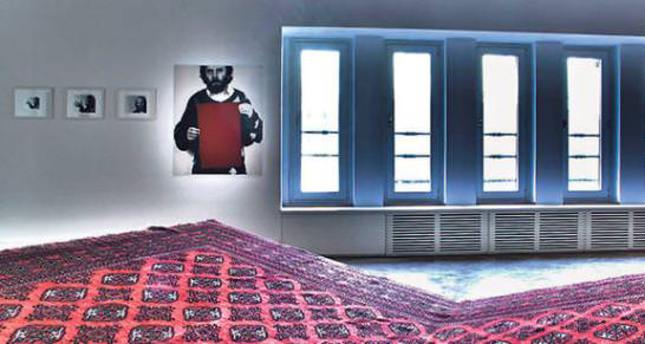 Religion is not the favorite subject of Turkish contemporary art. In the past, artists rarely touched on the subject. It is as though the art spaces here have somehow closed their doors to spiritual and religious issues. This may partly be due to the Turkish state's traditional treatment of spirituality and religiosity as things that need to be crushed down by force. Turkish artists and writers have often internalized the state's role as the bringer of enlightenment to ignorant masses: in classic Turkish novels, imams are often villains and the voice of the pious often serve the role of background noise. Rather than treating it as a serious subject, Turkish writers and artists have often imitated the approach of the state, condescending belief and spirituality, treating them as things their characters need to leave behind.

Descend the stairs of SALT Galata building on Bankalar Caddesi, turn right and you will hear amplified voices of Shiite Muslims who commemorate the Battle of Karbala during Muharram in an Istanbul neighborhood. Those chanting and weeping men are in a state of trance which Köken Ergun's 2012 video installation "Ashura" impressively represents. Köken's video is part of the "Rainbow in the Dark" exhibition which runs until Jan. 18. Realized with the Museum of Modern Art in Warsaw and curated by Sebastian Cichocki and Galit Eilat in collaboration with SALT, "Rainbow in the Dark" is one of the most evocative shows of the year. Featured artists include Kader Attia, Fayçal Baghriche, Miroslaw Balka, Fatma Bucak, Köken Ergun, Nilbar Güreş, Jonathan Horowitz, Gülsün Karamustafa, PawelKwiek, Virginia de Medeiros, Mujeres Publicas, Teresa Murak, Walid Raad, Zofia Rydet, Wael Shawky, Slavs and Tatars, Zbigniew Warpechowski and Artur Zmijewski.

"One of the major phenomena in contemporary society is the growing influence of monotheistic religious practices," the exhibition program informs us. "Radical movements in Islam, Christianity and Judaism appear to penetrate the ever-widening areas of social life, to the point where they threaten the more traditional understanding of religion. Additionally, we can observe how social movements stem from religious groups or turn toward religion in order to gain political power in different parts of the world, including South and North America, Poland and Turkey." In an effort to investigate the influence of religious norms on society, curators selected a core group of works from the collection of the Museum of Modern Art in Warsaw. Eliat and Cichocki note how the exhibition "takes a post-secular perspective, investigating how contemporary art challenges the outdated opposition between religious and secular societies. It explores the way current art addresses the appeal of rituals, mysticism and the irrational beyond the horizon of modernity." The works on display focus on religious rituals, gender politics and spirituality. One of the most impressive works is "Little Box of Matches" by the Argentinian artist collective Mujeres Publicas. It comprises a matchbox and a book which features Piotr Kropotkin's controversial view of religion: "the only Church that illuminates is the one that burns." Such provocative works are accompanied by those that have a much more serious tone. Wael Shawky's 2012 video "Cabaret Crusades: The Path to Cairo," is a case in point. Reinterpreting Christian Crusades with Arabic chronicles, this fascinating 61 minute video uses Amin Maalouf's book "The Crusades Through Arab Eyes" for its screenplay. It covers events from 48 years, from the end of the first crusade in 1099 to the beginning of the second crusade in 1147. "The film adheres to puppet-show conventions, and contains elements of musicals, popular science programs, nativity plays, and even horror films... It was made thanks to the artist's cooperation with a group of over 200 people: musicians, pyrotechnicians, and puppet-makers. All the puppets used in the film [more than 130 figures of Christians, Muslims, kings, caliphs, popes, martyrs and saints] were made at workshops in Provence according to the 18th century 'santons' technique used to produce clay puppets for nativity plays. The film was recorded in the cathedral of Aubagne in France."

Shawky's "The Path to Cairo" and Ergun's "Ashura" are perhaps the centerpieces of this show.

The latter video was shot in Zeynebiye, the Istanbul neighborhood where many Jafari Shiites in Turkey live. Ergun's approach to the theater performance and the ritual of the Karbala events is subtle. Finally, contemporary Turkish artists seem to come to terms with the realities of their country, which were conveniently left out of the public sphere.