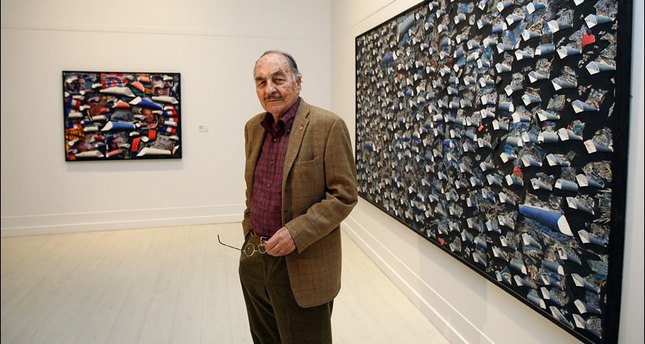 by Daily Sabah Nov 22, 2014 12:00 am
Turkish painter Burhan Doğançay's photographs will be on exhibition - "Picture the World" at the Doğançay Museum until Jun. 7, 2015. The event's official opening ceremony will take place on Nov. 25. Sponsored by the Turkish Economy Bank (TEB), the exhibition, which includes 100 photographs, features the artist's memories from different regions of the world, such as New York and Togo. The collection displays city walls that mirror society and reveal the socio-economic face of streets and neighborhoods. The photos show the social and psychological moods of cities and locals from the artist's eyes.

The exhibition was on display on Sept. 12 to celebrate the 10th year of the Doğançay Museum and the 85th birthday of the artist. Doğançay is known as the only artist who was allowed to take photos from the Brooklyn Bridge when it was undergoing its first comprehensive renovation between 1986 and 1987. His exclusive New York photos are among the exhibition's most special pieces. In addition, the event showcases photos that depict the artist's dangerous moments with the fearless ironworkers of New York who are called "cowboys of the sky." The photos on display will be put on sale at auction later and the revenues will be donated to UNICEF. Doğançay's works are shown in the permanent collections of the world's most prestigious museums.