Portrait of Ottoman Sultan on sale for 15 million euros 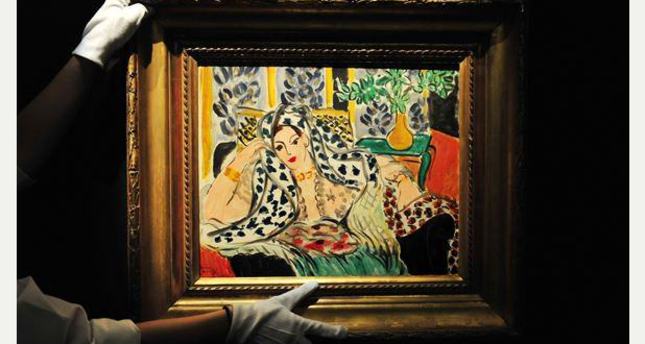 by Daily Sabah Nov 26, 2014 12:00 am
Henri Matisse's famous 1942 painting "Odalisque Au Fauteuil Noir" (Odalisque on the Black Armchair) is expected to sell for 15 million euros at auction. The painting, which will be sold in February 2015 by renowned London-based auction house Sotheby's, will take its place among other important works by Matisse, one of the most important figures of contemporary art. What makes this painting important is the woman featured in the painting, as she is Nermin Sultan, the granddaughter of the 32nd Ottoman sultan, Abdülaziz. The artist admired the beauty of Nermin Sultan and persuaded her to pose for his painting in 1942.

However, the story of Nermin Sultan, who died at the age of 76, is much shoddier than the painting. She was living without an identity card in France and surviving on the pension that the French government gave to poor people. She could barely use her eyes due to the stroke as well, and she passed away in 1999 at a hospital reserved for the needy in Bagnols-sur-Ceze in southern France. Her official name was Nezahat Nermin Hamide Şefkat and she was referred to as the "Ottoman Princess" in the documents that the French government gave to political refugees. Born in 1923 in Istanbul, the princess's father was Şehzade Şevket Efendi, the son of Sultan Abdülaziz. She was one-year-old when she was taken away from Turkey with the rest of the Ottoman dynasty and she was diagnosed with osteolysis at the age of five. She spent her childhood and youth with her grandmother, Naime Sultan, in Nice where she met with Henri Matisse.

The artist settled down in the mansion that is now Matisse Museum and become neighbors with the princess's family. The beauty of the young princess left Matisse speechless and he was able to persuade Nermin Sultan to pose for his painting. When World War II broke out, the princess left for Albania with her grandmother and fiancée; however, Naime Sultan died there while Nermin witnessed a communist firing squad affiliated with Albanian leader Enver Halil Hoxha execute her fiancée. She traveled to Egypt onboard a British ship and took shelter there with her father, Şevket Efendi.

After the Nasser revolution in Egypt, Nermin Sultan fled to exile to Algeria but had to return to France following the Algerian War. Nermin Sultan and her father settled down in Bagnolssur-Ceze. The princess had difficulty holding on to life after her father was killed during a robbery and was admitted to a hospital as her diseases progressed. She spent the last 25 years of her life bedridden and 75 years of her life in exile. Her funeral was attended by her doctor, Charles Turcy, and his wife.