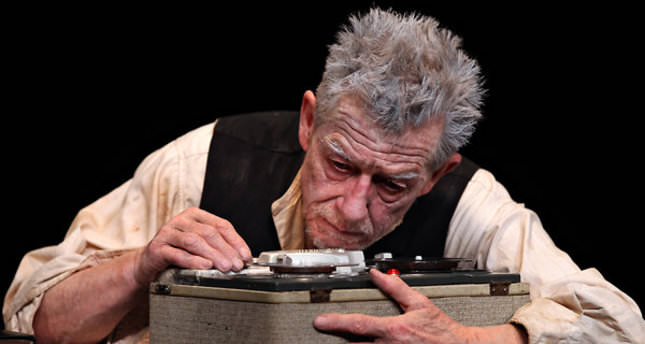 by daily sabah
Nov 27, 2014 12:00 am
World-famous Irish playwright Samuel Beckett's one-act play "Krapp's Last Tape" will be staged in Kurdish by TiyArtro on Nov. 28 at Istanbul's Şermola Performans Theater Hall. "Teyba Dawi a Krapp" made its world premiere on Oct. 6 at the Marjanishvili State Academic Drama Theater as part of the International Tbilisi Theater Festival. The play made its Istanbul debut on Nov. 1 at Şermola Performans. After its initial success in Georgia, TiyArtro was invited to the 34th International Theater Institute (ITI) World Congress in the Armenian capital, Yerevan. The group's performance at the Armenian Theater Players' Association received critical acclaim by international theater critics and ITI board members on Nov. 19. As the only foreign theater group during the congress, TiyArtro later took the stage at different festivals and countries. Beckett's play is the group's first project and dedicated to late Nobel-winner English playwright Harold Pinter and Kurdish author Mehmet Uzun. "Krapp's Last Tape" has been staged in various languages, including Esperanto, and was adapted to Kurdish for the first time. It was translated into Kurdish by Hilmi Demirer. Production and artistic design manager is Genco Demirer and Gökmen Kasabalı is the choreographer. The play is directed by Emre Erdem and background music was composed by Kristopher Fischer. Written in 1958, "Krapp's Last Tape" made its debut at the Royal Court Theater, under the directorship of Donald McWhinne with Patrick Magee as the leading actor. The play was staged 38 times. Beckett's play will celebrate its 56th year in Kurdish. Tarık Günersel, the president of PEN (Poets, Essayists and Novelists) Turkey and a member of PEN International will deliver a speech at the event.