Bulgarian church in Balat to reopen in 2015 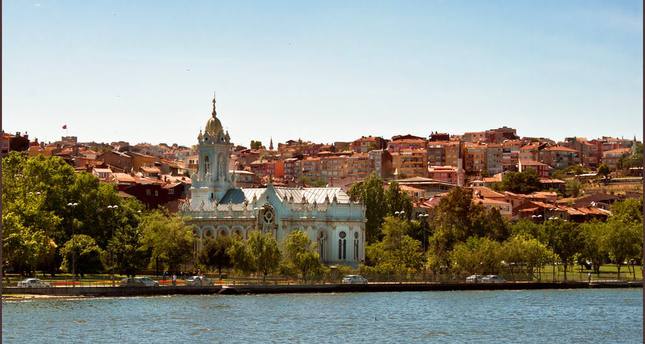 by Zeynel Yaman
Nov 29, 2014 12:00 am
The Bulgarian St. Stephen's Church in Istanbul's Balat neighborhood, the world's only surviving church made entirely of cast iron, will be open for prayer next January. Vasil Liaze, the President of the Bulgarian Orthodox Church Foundation, negotiated with President Recep Tayyip Erdoğan, who was then Prime Minister, for the church's restoration three years ago. In July of that year, restoration works kicked off in collaboration with the Istanbul Metropolitan Municipality and the Provincial Special Administration after detecting damages and degradation. Nine months after its start, a shareholder of the family company in charge, who was an architect, passed away. Other shareholders and the heirs submitted their claim to the municipality for the termination of the contract because they had no specialized renovation skills. After an assessment by the municipality, the partners reached a mutual agreement to terminate the contract. A new tender offer was initiated by the municipality. Almost TL 3 million ($1.3 million) was spent on the church's restoration. The historic church was erected in 1898 and was commissioned by the Principality of Bulgaria, established in the Treaty of San Stefano of March 3, 1878 and was financed by the Bulgarian government. It was completed in 1898 and inaugurated by Exarch Joseph I on Sept. 8 that year. Due to the weak condition of the ground, a prefabricated iron frame was used to reinforce the church that lies on the shore of the Golden Horn. The prefabricated parts were carried by ships over the Danube River to Istanbul's Black sea coast. The garnished church is a three-domed cross-shaped basilica and has a ground floor, a basement floor, a gallery and a spire.