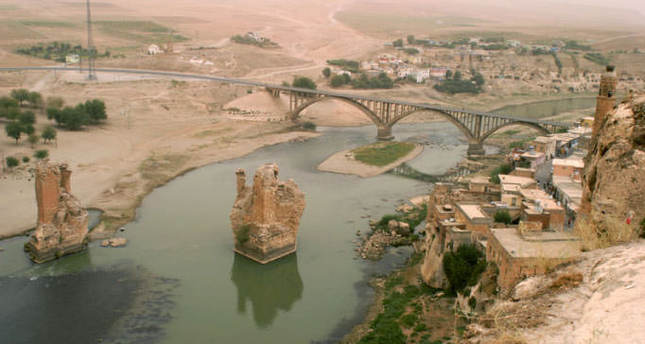 Archaeological excavations have been carried out in the Hasankeyf district of Batman for 10 years. Chancellor of Batman University Professor Abdulselam Uluçam reported that they have concluded excavations as of September. "Laboratory, storage and post-excavation analysis will continue until Dec. 15," he said. This year, archaeological excavations in the region took place in two areas. The archaeologists worked in a summer villa in an area named Selahi gardens which were once used as a summer resort by Artuqids, and at another mansion which features a storage unit for the vineyards and orchards surrounding it.

Although preservation and restoration works continue in the area, these buildings are likely to be submerged due to the Ilısu Dam. "We have a different excavation area in the region," Uluçam reported. Previously, an excavation took place in collaboration with a Japanese team on Hasankeyf mound. During the studies, archaeologists drilled 9.5 meters into the mound and discovered that this area was used by humans. However, no other settlement was found below 9.5 meters.

Uluçan said that results from the 2014 excavation reveal that there is not a single public place left to dig in Hasankeyf. He stated that the settlement where the locals of Hasankeyf live will be carried over to another place, and the excavation works in the district will be concluded as there is nothing left to discover. "We submitted the cost of the excavation works to GAP," Uluçam added. Since 2004, excavations have been taking place in 38 different areas, including 34 drilling works. Through these archaeological studies, 144 unknown cultural objects have been unearthed. Many architectural pieces, from ceramic to metal have been discovered in the ruins. Uluçam concluded, "We have also brought some of the objects used by the people of those times to light. We revealed that barley and wheat were not discovered then; however, people were growing lentils."