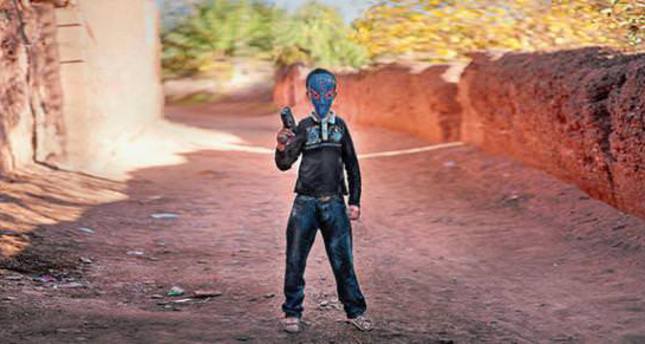 There is something deeply uncanny in Nuri Bilge Ceylan's photographs on display at Dirimart gallery in Nişantaşı. "Migrant Girl," one of the most impressive photographs of the "About Looking" exhibition, shows a young girl standing in a field with a mysterious expression on her face. The camera lens seems to have captured her intimate thoughts but as you get closer to the migrant girl's face it becomes increasingly elusive. Fans of Ceylan's films will know that feeling of not being able to penetrate a character, despite the director's long scenes where he meticulously captures the movements of his subjects. The uncanny aspect of Ceylan's work comes, partly, from his awareness about the gap standing between the viewer and the subject: although our glances meet on the medium of film or photograph, it is impossible for us to decipher a character's inner world.

Born in Istanbul on Jan. 26, 1959, Ceylan graduated from the Department of Electrical Engineering at Bogazici University, and studied cinema at Mimar Sinan Fine Arts University for two years. He made his first film, "Cocoon," in 1995, and went on to direct "Small Town" and "Clouds of May" both of which were screened at the Berlin Film Festival. Most people know his extremely personal films ("Distant," "Climates," "Three Monkeys," "Once Upon a Time in Anatolia" and "Winter Sleep") which won numerous prizes at Cannes Film Festival, including the Palme d'Or. But not everyone knows Ceylan's career as a photographer. Having started photography at high school, Ceylan's work frequently appeared in Atlas magazine in the 1990s.

In the beautifully designed exhibition program, Iranian visual artist Shirin Neshat writes about Ceylan's different roles as a story teller. "Stanley Kubrick began as a talented photojournalist prior to his prolific career as a film director, the Iranian filmmaker Abbas Kiarostami is an accomplished photographer, Wim Wenders has held major photographic exhibitions, while most recently we have witnessed the rise of the British visual artist Steve McQueen who has gained prominence as a talented filmmaker," Neshat reminds us. "A close study of Nuri Bilge Ceylan's films and photography reveals how he seamlessly and interchangeably engages with both art forms. There is a palpable gloomy tonality as well as a pervasive melancholy that characterizes almost all of his images."

"Baker boy in Urfa," a 2004 photograph taken with a wide lens, perfectly exemplifies Ceylan's story telling techniques and the pervasive melancholy Neshat mentions in her essay. We see the young boy in his baker outfit standing in between two narrow streets where two other boys look at the camera. There is a scary red cross on the wall and an arrow points to the bakery on the right side. Will the baker boy go there? Or will he take the other road and escape? Is he keeping a secret?

In his essay "About Looking," the exhibition's curator Heinz Peter Schwerfel reminds us that the English word "look" may be derived from the latin word for "light." "Thanks to light, we see. And because we see, we can look. At things. Or at people. People who might look back. No look is ever innocent," he writes.

Taking his cue from critic and essayist John Berger's words about looking, Schwerfel points to how Ceylan looks at the world and the world looks back to him. "When Ceylan portrays people by staging them inside a perfectly ordered, panoramic environment, they seem to look back into his camera; still it's him who decides how their look looks," he writes. "But it's always their look back at the camera that forces us to keep them in mind, to wonder who they might be, what they might think. But we will never know, for the expression on their face is ambivalent, a mixture of different moods and feelings - the human soul consists of many levels."

In yet another mysterious photograph, two pupils look at the camera with mocking expressions on their faces. What makes this image so compelling is that it undermines the traditional power relation between the highbrow art public and the object of their gaze, the "gloomy Anatolians." For once "they" are making fun of "us," rather than the other way round.