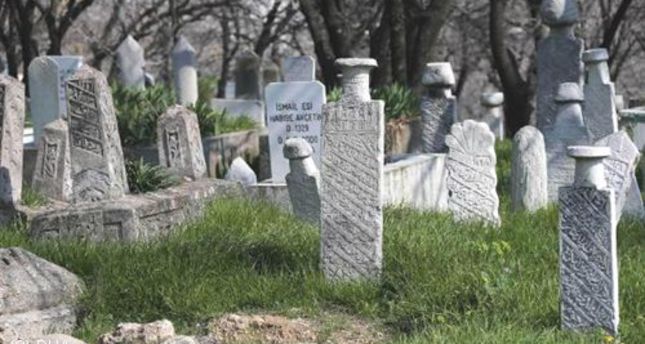 by Daily Sabah Dec 12, 2014 12:00 am
Prominent author Nidayi Sevim, who has carried out many years of research into the subject of Ottoman gravestones, has collected the poetic verses written on gravestones in a recently published book.

Sevim recorded the literary verses that were written on Ottoman gravestones in numerous historical cemeteries across Istanbul. He visited 20 provinces across Turkey to collect epitaphs in the Ottoman language as part of his research. The literary writings on the headstones— which are mostly about death— have been gathered in a book, which has attracted readers' attention, Turkish daily Hürriyet reported on Friday.

The verses on the gravestones, Sevim said, are like a guide to the human beings who shed light on history and also light up the road to our future.

"They are sources that we cannot find anywhere else. They carry vital information about the structuring of the cities, the process of changes, disasters, epidemic illnesses, sociological formations and their tendencies," Sevim says.

Defining epitaphs as the 'inaccessible treasure of literature history', Sevim said that the verses serve as a bridge between the past and the future.

Sevim begins his book with the verses on the gravestone of Ottoman general and Grand Vizier Lala Mustafa Pasha, who passed away in 1580, and ends his work with verses from more recent times.

One epitaph he allocates in his book reads:

"See, what these gravestones tell you,
One lie ended here and one truth has begun."