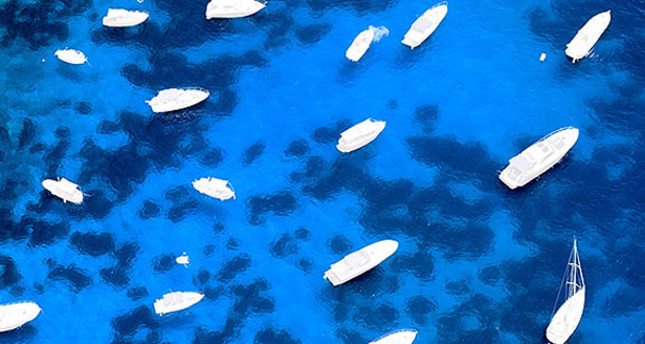 The "Capri Trend" exhibition is organized by Fondazione Capri, a private Italian foundation founded in 2009 by a group of members including local authorities and entrepreneurs, to promote the culture of the area and enhance the architectural heritage and landscape of Capri. Starting in 2010, the foundation began to organize, among other projects, an annual Festival of Photography, which hosts and commissions works by Italy's most renowned photographers. Their photos have been shown during the last five years in Capri, at Villa Lysis, an ancient monastery of Certosa di San Giacomo and the Casa Rossa. Curator Denis Curti selected five photographs each from artists Olivo Barbieri, Maurizio Galimberti, Francesco Jodice, Irene Kung and Ferdinando Scianna. The exhibition consists of 25 works that offer a contemporary response to the cultural history and long-standing beauty of Capri. The five photographers have separately interpreted Capri, the Neapolitan, multifaceted island, which is entwined with the history of the avant-garde, and has acted as a refuge for modern art and thought. Barbieri, Galimberti, Jodice, Kung and Scianna, each in their specific relationship with photographic languages, regenerate and reinvent the very image of the island.

Barbieri and Scianna tell the story of the human dimension of the island and of the life that is lived there. Barbieri's site-specific photography hovers over Capri, describing its form via extensive views of specific places and spaces. From the sky of Capri, looking down on the island just as he did on previous helicopter trips over megalopoli around the globe, Barbieri focuses on the relationship between man and the environment. Here the island assumes its position within the contemporary urban context, as the portrait of a world in miniature.

Kung absorbs the silent emergence of the natural and architectural beauty of the dark Mediterranean night. A single image expresses the source of this sentiment in which the "faraglioni" seem to speak of Capri, as it emerges from the sea, as though the origin of its ancient nature. Capri is a place that due to its harsh and luminous, ambivalent nature, has inspired symbolic iconography. This spans from the metaphysical atmospheres reinterpreted by Galimberti to symbolist painters like Wilhelm Diefenbach, revisited by Jodice.

In Jodice's practice, the canvas as a pictorial and imaginary support is more than present due to the detail of colors and the texture of the surface. In this journey, which goes from the elaboration of the material to inspiration, Jodice retraces the places of Capri explored by Diefenbach as if affected by a particular form of Stendhal Syndrome. Evocative impulses give way to contemporary investigations of the relationship between the island, nature and human intervention.