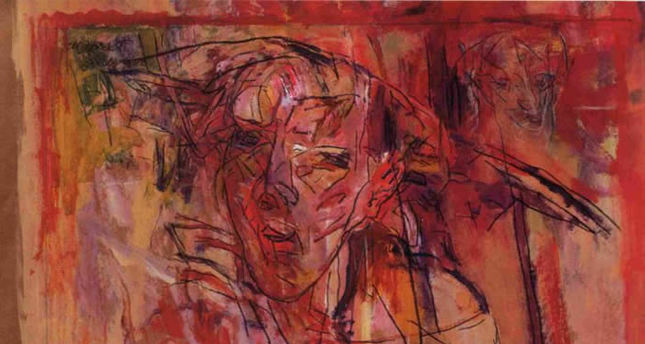 by Zeynep Esra İstanbullu Dec 30, 2014 12:00 am
"Painter and Painting: Mehmet Güleryüz Retrospective," presents an inventory of the Turkish painter Mehmet Güleryüz's career from the 1960s up to the 2010s at Istanbul Modern from Jan. 8 to June 28. The exhibition sheds light on his deep quest for expression in various fields from sculpture, engraving, drawing and theater to performance. With its critical and expressionist style, Güleryüz has a special and privileged place in the Turkish art scene. His works are mostly centered on humans and the socio-political conditions surrounding them. Born in 1938, Güleryüz reflects the impacts of socio-political transformation on people in Turkey through figurative works nestled in both critical and ironic language. He describes love for family, male-female relations, nature and living beings, and the processes that influence visual and oral culture as human acts. Güleryüz produces art in a way that invites viewers to take a stance, as he does, and to face what has happened in our history.

The experienced painter studied at the State Fine Arts Academy in the 1960s and became popular in the Paris art environment with his "happenings" in the 1970s. He took an active role in the transformation of Turkish art in the 1980s. His art shows an unusual development that describes how he is able to generate an individual discourse. Güleryüz is also an actor, allowing him to create a close link between the theater and visual arts, and produce the most interesting examples of an interdisciplinary approach.

Based on daily perceptions and common feelings, his works of art form part of a social process, and refers to a specific historical period. For nearly 60 years, Güleryüz's art has developed and been enriched following its own path. Applying a unique style in his drawing and patterns, for him, drawing is not a component of painting, but is an artistic language all on its own. This art form is as close to him as breathing, holding on for life or celebrating his own existence. Güleryüz has produced countless works on the reflections of his drawings and paintings in the physical and three-dimensional world. Since the 1970s, he has conducted significant studies in the field of sculpture. He followed the traces of his figures in a three-dimensional world. The exhibition gathers Güleryüz's works in the fields of painted porcelain, drawing, paintings and sculpture since the 1960s. Introduced in chronological order, the exhibition is enriched with texts written by Güleryüz, who explores his inner world. The almost 200 works of art makes the deep and passionate relation between a painter and his works visible. There will also be 150 drawings animated in multimedia presentations. Alongside these, a rich bibliographical wall introduces a personal story from the art scene in Turkey with Güleryüz's own life story, texts written for him, different experiences, and all periods in his artistic career from the 1960s to the present day.