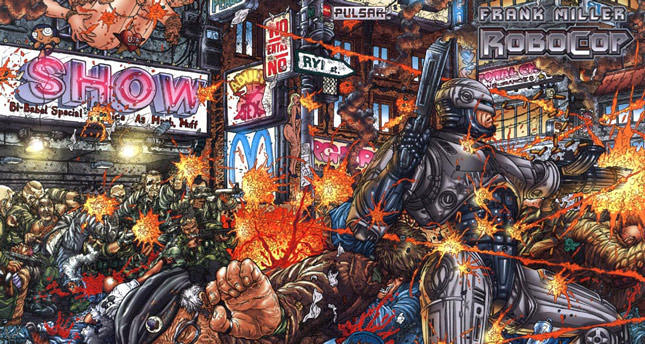 Paul Verhoeven directed the first feature-length film featuring the RoboCop character in 1988, while Irvin Kershner directed the second film of the series and Frank Miller wrote the script. After many years, a Turkish artist's name has been added to the long list of RoboCop's adventures as well.

Assistant Professor Öztekin of Dokuz Eylül University drew RoboCop many years after Juan Jose Ryp, who was the first illustrator to adapt Miller's film script for RoboCop into a comic book. Frank Miller wrote the script for the third film of RoboCop upon the request of Metro Golden Mayer Studios (MGM), and Steven Grant adapted the script to a comic book. "RoboCop: Last Stand 1" was published with the drawings of Öztekin in March by Los Angeles-based publishing house BOOM! Studios and the second edition of the comic book launched on Dec. 16. The comic book, which was also published in Spanish and French besides English, has already found its place on the shelves across the U.S and is also being sold online.

Öztekin, the writer of "Manga: Bir Kültürel Direniş Aracı" (Manga: A Tool for Cultural Resistance) said that the editor of BOOM! contacted him via the Internet. The illustration artist - who previously worked with Tom Garcia on the Hellraiser project, which written by British director and author Clive Barker - said that the publishing house auditioned him like an actor. "I drew the script on two pages and sent them the draft. The selection committee was composed of anonymous executives of MGM," Öztekin said, giving insights into the process of being chosen as an illustration artist of the comic book. "Although many illustrators were invited to the process, the committee approved my drawings. At first, the project was kept a secret. However, after a while, BOOM! Studios published the posters of the comic book on their website. It was the first time that I saw my name written alongside Frank Miller's. This project is a dream-like opportunity for a Turkish illustrator."

Stressing that the world is now a smaller place thanks to communication technologies, Öztekin said that people who can produce high quality work can access all parts of the world by sharing their work online. "My job is to gather stories and tell them to everyone," the artist said, adding, "Everybody has a story; the solution of a problem might be the focal point of another story."

Öztekin added that it is no surprise that people have heard his name, as he is known for his alternative narration style. "I am not a popular man; I am an academic who wants to produce good work in his small world," he said. Öztekin claimed that he receives offers from different countries and writers and said he is currently working on adapting the work of a New Zealand writer into a graphic novel. Regarding the question of illustrating a Turkish story, Öztekin said, "We are getting there. There are a lot of stories I want to tell, but we have to establish a social network first. There are editors and publishing houses. However, my concern is to share our story with the world. This project can be put into practice, as I realize through the people I have met on this journey that nothing is impossible." Öztekin, who has adapted many heroes into comic books, also said, "everybody can be a hero once they start to write their own stories." RoboCop is one of three pioneering science-fiction films that consists of violent action scenes. It is set in Detroit in the near future where people are struggling with unemployment due to a single corporation that owns all public institutions, and fear, violence and social degeneration are rampant in the city. After police officer Alex Murphy is brutally attacked, scientists turn him into a crime fighting cyborg with what is left of him. The character is American, but it is influenced by Japanese manga and it is highly popular in Europe.