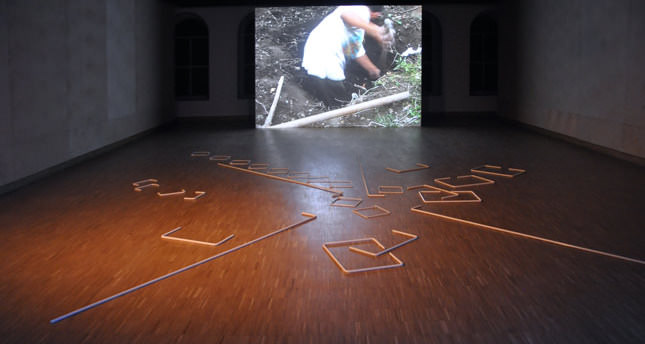 I wasn't quite expecting to come across Osman Hamdi Bey's name in the new Akram Zaatari exhibition at SALT Beyoğlu. The great Ottoman man of culture makes a curious appearance on the first floor where, in a taped interview, his niece Azize's grandson Edhem Eldem talks about his excavations. The director of the Empire Museum (Müze-i Humayun) Osman Hamdi Bey famously led excavations at Saida and it was thanks to the discovery of the sarcophagus of Alexander the Great that the Museum's new building was built. SALT Beyoğlu, which devotes its three floors to Zaatari's work, seemed to me like the ideal place to listen to Eldem's reflections on Osman Hamdi Bey's contributions to Turkish museology.

In 2014, Zaatari lived at Boğaziçi University campus as part of the university's Boğaziçi Chronicles residency. There he conducted research on Osman Hamdi Bey's 1887 excavation in Saida. In collaboration with SALT, he developed an installation where the act of excavation is used "as a metaphor for concealing and revealing artefacts, namely archaeology and whatever its opposite could be." Featuring interviews and documents, his installation is accompanied by a video titled "Letter to a refusing Pilot." This visual letter addresses the pilot who had refused to bomb the school founded by Zaatari's father. There are other letters on the first floor: "Letter for a Time of Peace" and "Letter to Samir" show us how a communist fighter, who takes refuge in the house of a family, hides inside a cannon shell a letter he had written to his hosts. He places the cannon beneath the garden of their house and the excavation of this item brings us to the moment of its creation. In another video, "Time Capsule," Zaatari does a similar thing and hides his archive, while filming the process.

"A Photographer's Window," placed on the second floor, brings us to a photographer's studio in Saida. Hashem el Madani's archive of photographs from the 1950s and '60s show us the picture of a city's inhabitants. In his studio (which resembles photo studios in Turkey) Madani took pictures for ID papers as well as weddings and baby pics. Madani's studio was located in a building called Shehrazade in Saida where he had around a hundred customers a day. Happy days of Madani and his studio came to an end, however, when the Israeli army invaded the city in 1982. A shell landed inside Shehrazade and killed one of Madani's friends. Zaatari presents Sherhrazade as a laboratory and an archive.

In the studio people acted out their emotions and behaved as if they were actors. Curiously, because Saida was a conservative society, men were not allowed to kiss women (and vice versa) inside the studio, so it was only allowed for men to kiss men and women to kiss women. The city's atmosphere changed in the 1970s when people started posing with rifles and pistols. In another video, "On Photography, People and Modern Times," Zaatari explores the concept of photographic archives and focuses on his photographic records for the Arab Image Foundation.

The video asks questions about how we, in the present time, can approach the intimacy of past moments recorded in photographs through the mediation of an archive. The SALT Beyoğlu exhibition, which runs until Feb. 15, also hosts elements from different volumes of work, including "The Uneasy Subject," "28 Nights and A Poem" and "Earth of Endless Secrets."

Zaatari's "Beirut Exploded Views" is also on display and "Letter to a Refusing Pilot" will be screened in SALT's Walk-in Cinema at scheduled times.

Born in 1966, in Sidon, Akram Zaatari co-founded the Arab Image Foundation in 1997 and often focuses on archiving the photographic history. Zaatari represented Lebanon at the Venice Biennale in 2013. "I'm really interested in how the personal and the intimate meet history," he said in an interview with the BBC last year. "What I'm doing is to write history, or [fill in] gaps of history, by using photographic documents... I feel more freedom dealing with distant times as opposed to my times. That's also my problem with what you see about [the] Arab uprising today in the media. I do not know yet where it's going to lead me, I do not make sense out of it today."

Nevertheless works on display on the third floor show Zaatari's interest in what is taking place in technology today. A four-channel video installation based on YouTube material made by individuals filming themselves in Egypt, the Emirates, Saudi Arabia, Palestine, Yemen and Libya, "Dance to the End of Love" was first shown in 2010. Zaatari's film "Beirut: Exploded Views" is even more contemporary, showing a post-apocalyptic city where people communicate only through their smartphones. Those young men never speak to each other and seem to embody the spirit of our time.