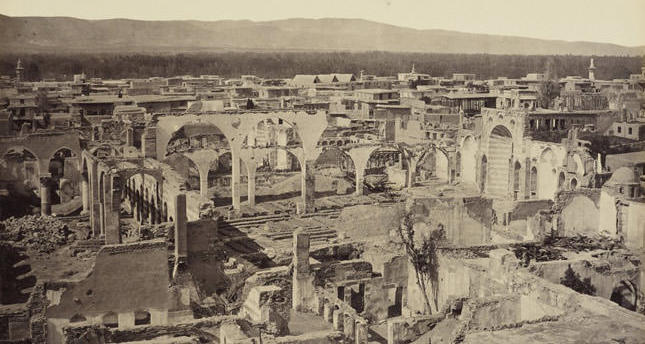 The ongoing exhibition shows the expedition photos taken during a four month-long royal tour through Egypt, Palestine, Syria, Lebanon, Turkey and Greece in the 19th century

Capturing a historical moment in time, the Queen's Gallery in London follows the records of a royal tour with the photography exhibition "Cairo to Constantinople: Early Photographs of the Middle East." Seen through the photographs of Francis Bedford, an experienced architectural photographer in Victorian England, the event invites visitors to be a part of a four-and-a-half month expedition from Egypt, Palestine, Syria, Lebanon and Turkey to Greece.

In the spring of 1862, the Prince of Wales - later King Edward VII - embarked on an educational tour of the Middle East with a small entourage. The reason behind the journey was not merely to train the future king of England, but to guarantee the route to India at a time when the Ottoman Empire had lost its grip on the lands through which the Prince was travelling. Twenty years after the arrival of photography, Bredford shot each of his 190 prints while they were travelling in a very non-royal style: Sleeping in tents and wandering around on horses.

These attractive photographs have much to offer those who would like to explore a landscape rich in archaeological sites such as the Egyptian cities of Alexandria, Philae and Luxor, or to catch a glimpse of Islamic culture in Syria with the photos of the Great Mosque of Damascus or the Straight Street, a narrow lane running between Christians and Jews. As stated in the exhibition description, the northeast axis of the street was allocated for Christians upon the order of Ibn al-Walid, the Muslim conqueror of Damascus, in order to preserve the Orthodox churches in the area and allow them to access the places of worship.

Following young Napoleon's campaign in the 18th century, more travelers and artists set off on journeys to Egypt to view the pharaonic ruins and temples. Bredford photographed early examples of Islamic architecture, featuring the tombs belonging to the former Mamluk Sultanate that ruled Syria and Egypt from 1250 to 1517 as well as the Citadel of Cairo, the Great Pyramid of Giza and the statues of Pharaoh Amenhotep III. The tour's next stop was Palestine and the cities of Jerusalem, Bethlehem, Nablous and Hebron, all of which are closely associated with biblical events. Among the exhibition photos, there are some depicting sacred Islamic sites including the Dome of the Rock and the Mosque at Hebron.

The prince and his entourage later visited Lebanon, and the final part of the cultural tour included Turkey and Greece, taking almost three months. Before arriving to Istanbul, they went to some islands including Rhodes and Patmos. According to the travel accounts, the group stayed for one week in Istanbul, where the Prince met Ottoman Sultan Abdülaziz. Seven years later, Prince Edward returned to the city for his second visit. In this regard, it is interesting to note that Sultan Abdülaziz, as the first Ottoman ruler who traveled through European countries, paid a visit to Queen Victoria, the mother of the Prince of Wales in 1867, five years after the expedition. A closer look at Bredford's photos reveals an oriental perspective, suggesting that the British photographer successfully reflected the Eastern aspects of each city, including Istanbul. One of them shows the Nusretiye Mosque with cannonballs in front of it. Founded in 1826, the historic mosque was covered by both Islamic and baroque elements, which was seen among the late Ottoman mosques under the influence of Western-style architecture. Other photos of Istanbul include views from the famous Galata Tower, the Tophane Fountain, which stands out with its Ottoman rococo ornamentation, Dolmabahçe Palace, the military hospital used by British forces during the 1855 Crimean War and the Süleymaniye Mosque.

Following their visit to Istanbul's highlighted venues, the group set sail for Athens before traveling back to England on the royal yacht. They stopped at several islands such as Cephalonia, Ithaca and Malta as well. These extraordinary photographs are all gathered in an illustrated book titled "Cairo to Constantinople: Francis Bedford's Photographs of the Middle East" by Sophie Gordon, the senior curator of the exhibition. Along with certain sections from the Prince's diary, the archival material will appeal to anyone interested in the history of the Middle East and 19th century Istanbul with its stunning architectural views. In 2013, the images were on display for the first time in over 150 years in Edinburgh.

The exhibition will run to Feb. 22 and its online version can be found with descriptions and related articles on the official website of the Royal Collection.