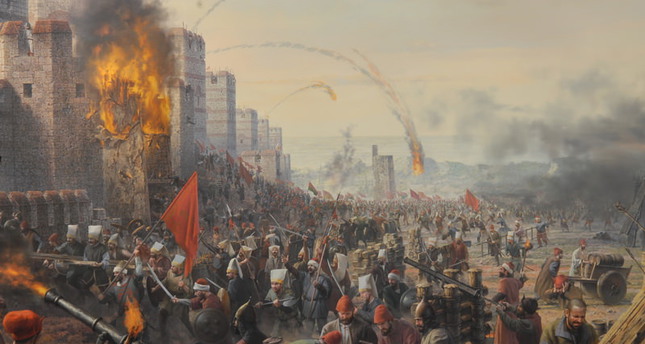 by AA Jan 17, 2015 12:00 am
Displayed at the Panorama 1453 History Museum is allegedly the world's largest panoramic painting which depicts the conquest of Istanbul on a 3,000 square meter area with its 3D objects platform. It will be nominated for the Guinness Book of Records.

Salih Doğan, the Manager of Panorama 1453 History Museum and Kültür A.Ş. (Istanbul Metropolitan Municipality's Cultural Enterprise) told Anadolu Agency correspondent that their museum, which opened its door on January 31, 2009 drew nearly 800,000 visitors in 2014. He claimed that the museum hosts many foreign tourists from Arabic countries and the Far East.

Doğan described the three-storied museum as "an exhibition of a conquest starting from the establishment of Istanbul and chronologically continues with Istanbul's siege and Ottoman Sultan Mehmed II."

Regarded as the "heart of the museum," the 3D painting, which was completed in three years, invites visitors on a journey through time with the voices of the soldiers of Mehmed II saying "Allahuekber," accompanied by the music of an Ottoman Marching Band.

Under the guidance of Haşim Vatandaş, the painting was created by a group of artists including Ramazan Erkut, Ahmet Kaya, Oksana Legka, Yaşar Zeynalov, Hasan Dinçer, Atilla Tunca and Murat Efe, with the contributions by Professor Feridun Emecen as a history consultant.

The panoramic painting, which stands out at the Panaroma 1453 History Museum among other objects, features 10,000 figure drawings including a depiction of the sky and scenes from Istanbul's conquest. Depicting Mehmed II with his close commanders in Topkapı facing the Byzantine enemy, the painting also describes the Ottoman military band and the janissaries. Moreover, the details of the panting and the faces of the people depicted in the painting can be observed in 3D with special binoculars.

Doğan, who stated that the painting is probably the largest of its kind, stated that they will submit their application to the Guinness Book of Records in the near future. "The artists hid Mehmed II's well-known portrait by Bellini inside the clouds in the painting. The portrait cannot be detected easily, so people have to try hard to separate it from the clouds. This is one of the unique features of our museum," he added.

Doğan concluded by saying that the museum has also been visited by actors and film producers who want to shoot a film about the conquest of Istanbul.