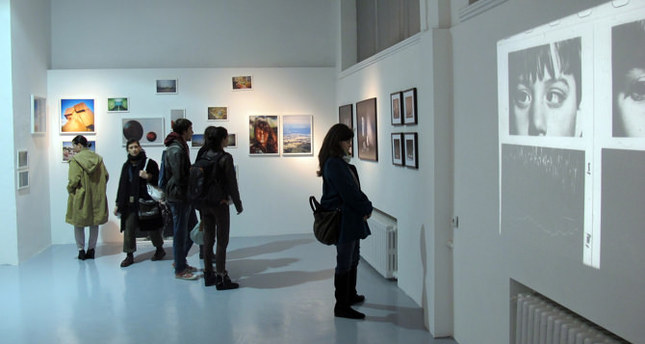 Istanbul Modern presents the exhibition titled ‘Artists’ Film International,’ which focuses on contemporary video art, featuring films and animation by visual artists from around the world until March 12

Curated by Çelenk Bafra, an exhibition named "Artists' Film International" showcases video installations of Burak Delier with his "Crisis and Control" and Vahap Avşar with "Road to Arguvan," along with the latest film works of artists from 15 different countries. The selected films, including "Conflict," "Interpretation of Performance in Urban Life," "Bodily Limits" and "incident narration," have been arranged into different categories and will be projected onto screens for viewing. The video room of the exhibition - known as the Black Box - displays a video installation from around the world every week. Moreover, panel sessions and presentations regarding video art and artists are being held alongside the exhibition. The Belgrade Cultural Center Curator, Zorana Dakovic, and artist Milica Tomic's panel session focusing on video art in Serbia will take place on Jan. 28 at 6:30 p.m. Initiated by London's prominent art establishment, Whitechapel Gallery in 2008, "Artists' Film International" is a program held in collaboration with 17 art institutions from different parts of the world. The partners share their knowledge and expertise in video art, while contributing to the program by selecting new works of one of the prominent artists in their country every year. Following the curatorial work by each program partner, selected videos are screened or incorporated into an exhibition. In the past seven years, Istanbul Modern has contributed to the exhibition with the videos of Ali Kazma, İnci Eviner, Ergin Çavuşoğlu, Sefer Memişoğlu and Bengü Karaduman. Working with Bural Delier throughout 2014, Istanbul Modern invited Vahap Avşar to feature his work in 2015. Avşar's video titled "Road to Arguvan" will be screened at the exhibitions and events organized by the program's partners throughout the year. Additionally, the other artists featured in the Artists' Film International 2015 are: Yuri Ancarani, Lee Kai Chung, Burak Delier, Dalila Ennadre, Provmyza Group, Mattias Harenstam, Oded Hirsch, Rebecca Ann Hobbs, Tran Luong, Jorge Macchi, Nicole Miller, Karen Mirza and Brad Butler, Uudam Tran Nguyen, Masooda Noora, Pallavi Paul, Elisabeth Price, Tejal Shah, Anatoly Shuravlev, Angela Su, Milica Tomic, Diego Tonus, Amir Yatziv, Tanya Busse and Emilija Skarnulyte.

Employing various techniques such as photography, painting, performance and film, Vahap Avşar's works are dominated by the influence of the conceptual art tradition. The artist intends to reveal the problems of our geography that have remained veiled for a long time through his works, which are produced with images engraved in our memories as well as everyday objects and popular culture aesthetics. While his style appears minimalist and striking, his works criticize power struggles, political repression, social violence and conflict. In his video "Road to Arguvan," Avşar directs the camera to a giant crack that was formed in the 1980s on the only road connecting Arguvan, the artist's native town for generations, to the city of Malatya in Turkey. Although the crack on the asphalt makes the road useless, the government neither repairs it nor builds a new one. Thus, the town, which has lost its only connection to the rest of the world, gradually becomes destitute and lacking fundamental necessities, such as supplies for the hospital and law and order from the courthouse, and is abandoned to its fate. This crack is both the main subject and metaphor of "Road to Arguvan." Shot with a hand-held camera, this short, striking and intense video full of mystery, and associations can be interpreted as a testament of the past and recent socio-political conflicts in Turkey. It raises questions such as what or who caused this crack? Is it a natural event such as earthquake that shakes the earth or an unknown power beyond our comprehension? What is happening beneath the earth that was covered by asphalt? And will it be possible to understand the meaning of this crack by looking into it?

Zorana Dakovic, the curator of the Belgrade Cultural Center, which is one of the partners of the program, and Millica Tomic, will come together for a panel session as part of "Artists' Film International." The session will focus on Tomic's film, videos and performances as well as video art in Serbia. Born in Belgrade, Tomic is a conceptual artist exploring different art fields, genres and methods. Her works study and reveal political violence and trauma, as well as social amnesia, paying particular attention to the relationship between intimacy and politics by opening these issues up for public debate. Tomic, who is the creator of numerous international art programs and workshops, has been a lecturer and guest artist at international institutions of contemporary art. When: Jan. 28 at 6:30 p.m.