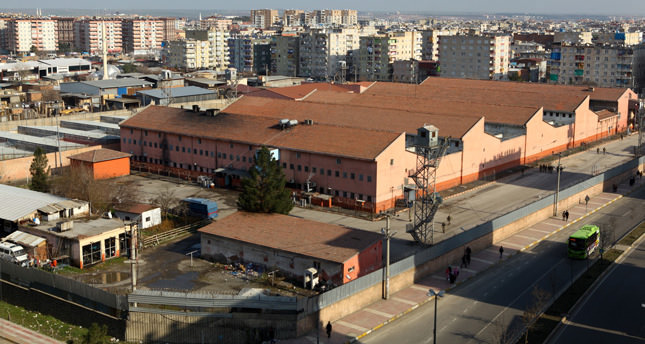 by Anadolu Agency Jan 28, 2015 12:00 am
Nongovernmental organizations and the people of Diyarbakır have expressed contentment following Prime Minister Ahmet Davutoğlu's statements at the Justice and Development Party's (AK Party) convention in Diyarbakır. During his speech, Davutoğlu said, "We will convert Diyarbakır Prison, which evokes bitter memories, into a cultural museum. From now on, Diyarbakır will be remembered as a place of culture, peace and brotherhood."

Following the military coup on September 12, 1980, Diyarbakır Prison has become known for allegations of torture and has been the subject of numerous documentaries and books, which cover the torture methods practiced in the prison. Nongovernmental organizations regarded the news as a positive step and want to offer their help, as they believe it will give a boost to the Reconciliation Process.

The spokesman of the 78s Initiative Diyarbakır No: 5 Military Prison Search for Truth and Justice, Celalettin Can, told an Anadolu Agency reporter that they have shown outstanding effort to transform the prison into a museum for the last seven years, and said that they see the statements of Davutoğlu as a part of this campaign. Can noted that they want to contribute to the process as a commission.

The initiative has been collecting information and documentation, as well as conducting research into the lives of the people who lost their lives in the prison and discussing the matter with experts. "We support the plan to convert the building into a cultural and living museum for hosting conferences and discussions on what happened there." Can expressed their wish to work together with the government via a commission, and said that they will work together to overcome concerns.

Can said that they formed the Diyarbakır No: 5 Prison Museum Initiative within their committee, and that they want to meet with Prime Minister Davutoğlu to share their efforts and ideas on the matter. "Diyarbakır Prison is the Turkish people's conscience, a symbol of pain. Whoever converts this prison into a museum suitable for the collective memory of the Turkish people will achieve a historical success. It will also contribute to the reconciliation process," Can emphasized.

Human Rights Association (İHD) Branch Chairman Raci Bilici also said that they have been struggling to transform the Diyarbakır Prison into a museum. "We need to face what happened in that prison through the museum. Crimes against humanity were committed in that prison. We are ready to offer all the support in our power if the authorities preserve the past of the prison while converting it into a museum," Bilici noted.

He continued, "Diyarbakır Prison is a place that was established to eliminate the Kurdish people who struggled to protect their identities and culture, and stands as a symbol of this. In that prison, many Kurdish intellectuals and thinkers as well as civilians were tortured, killed and had to endure practices that go against human rights."

Bilici claimed that Turkey has to face this reality, unveil the true nature of all these incidents and bring those who committed these crimes to justice. He also suggested that the museum should display documents revealing what happened in the prison for future generations. "Our children could be able to say "people who torture others and committed crimes against humanity had to answer for their crimes in Turkey,' " he added.

Stressing that once everything about Diyarbakır Prison is unveiled and people's consciences are eased, Bilici said that many people agree with his ideas. The president of Diyarbakır's Bar, Tahir Elçi, also said that it is pleasant to hear that Prime Minister Davutoğlu agrees with their demand to convert Diyarbakır Prison into a human rights museum. Elçi stated that such symbolic steps make huge contributions to the reconciliation process.

Pointing out that other countries which went through a process similar to Turkey's have taken similar steps, Elçi said, "Converting places like Diyarbakır Prison, which has symbolic significance and is always at the back of people's minds is a sign that the old times are behind us, and that we have embarked upon a path of no return," he stated. Elçi concluded that opinions of nongovernmental organizations should be taken into account during the process and they are ready to support the project in any way they can.

Human Rights and Solidarity Association for the Oppressed (Mazlum-Der) Branch Chairman Abdurrahim Ay emphasized that they are one of the organizations which has been long demanding the prison be converted into a museum. Stating that they are waiting for the results, Ay said, "What happened in the prison following the military coup in 1980 created a public opposition among Kurdish people. All the crimes committed against humanity in that prison are still alive in people's mind. Converting the prison into a museum will stand for facing our past and accelerating the reconciliation process."

The Grand National Assembly of Turkey (TBMM) Petition Committee finalized the application, which contains 100,000 signatures collected within the scope of "Let's Convert Diyarbakır Prison into A Human Rights Museum" campaign on July 25, 2014.

The ruling emphasized that Diyarbakır Military Prison is a building that is the symbol of the inhumane treatments engraved into people's memories. It is also stated that converting the prison into a museum, similar to Ankara Ulucanlar Prison, will be beneficial to society and contribute to the maintenance of social peace, as well as preventing these kinds of wounds from being inflicted again.