Turkish painter focuses on the body and water skirting reality 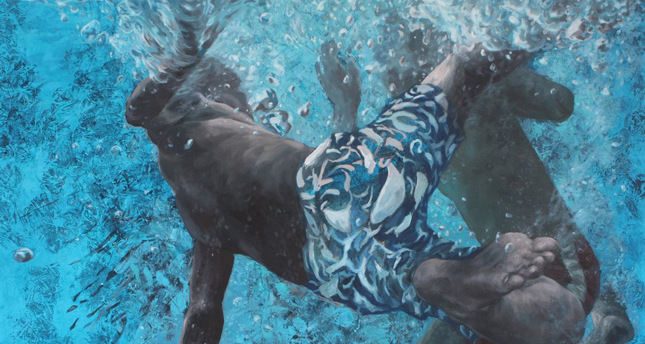 Painter Zuhal Baysar will open an exhibition on Friday at Galeri Soyut titled "Touch My Soul," which explores the relationship between water and the body. The exhibition will continue till Feb. 18. Baysal's paintings feature nothing but two things - water and body. She uses water as a metaphor of the universe, created by human beings themselves. Water might be seen outside of the body, yet it reflects the depths of the soul. In other words, the soul is indirectly painted under the pictorial water. Her works prioritize the character and spirituality of human beings. The body is a means to visualize the conditions of existence.

It is possible to create an association between Baysar's own life perception and Heidegger's philosophy. Heidegger claimed that human beings are left on earth as they are. The freedom of creating their own being is granted to humans. In the beginning, however, being left to existence unavoidably brings the absence of freedom, similar to the inevitability of death. It is not the result of a choice, yet the condition of being left urges them to create their own life. Heidegger's philosophy talks about the experience of forced freedom. Humans need to make decisions constantly in order to realize their own existence. Baysar's paintings are the visual evidence of this thought system. The universe transforms into a peaceful temple in the inner world of the artist, where one takes shelter from time to time and enjoys the freedom.

Human beings are the subject of a kind of purification ritual, through which they are all covered with water and cleansed from the weight of the outer world. Sometimes, this universe turns into a battle field. There is everything that makes a human. On the one hand, there are fears, greed, guilt, insecurity and insufficiency; on the other, there is love and compassion that bring meaning to life. There is also an inconceivable power and resistance for self-protection and self-defense against the threat of extinction. These two opposite poles comprise the essence of the universe that a human hides from the outer world. "Being inside" means being in the water. Water, which gives life and cleanses everything, turns into a universe of silence which surrounds and gives relief to the body. The depth of this universe is measured by one's loneliness, which becomes deeper and more silent to the extent he/she allows. Under any circumstances, human beings are free in water and can avoid daily behavioral patterns. Baysar carries the private lives of humans into water. The body sometimes suspends in air. Otherwise, either water or the body dominates. However, it reflects the existence of a powerful soul. Emotional moods that emerge by shaping the human soul through the concepts of "order-chaos," "existence-absence" and eternity become visible along with an intense emotional expression reflected by the "body" and "water." Baysar tries to create a rich atmosphere in water while masterfully integrating the plasticity of paint with meaning and expressions. The ripples of water are seen as abstract forms on the surface of the painting. They also exist as a means of expression of the water's emotional atmosphere. Baysar particularly emphasizes the aspect of paint that intervenes in the meaning. She suggests that modern patterns can be captured through the medium of the painting and the paint contributes to these patterns as well as diversifying the meaning. The artist invites the audience to "touch" various emotional states of her inner world in her own painting adventure.