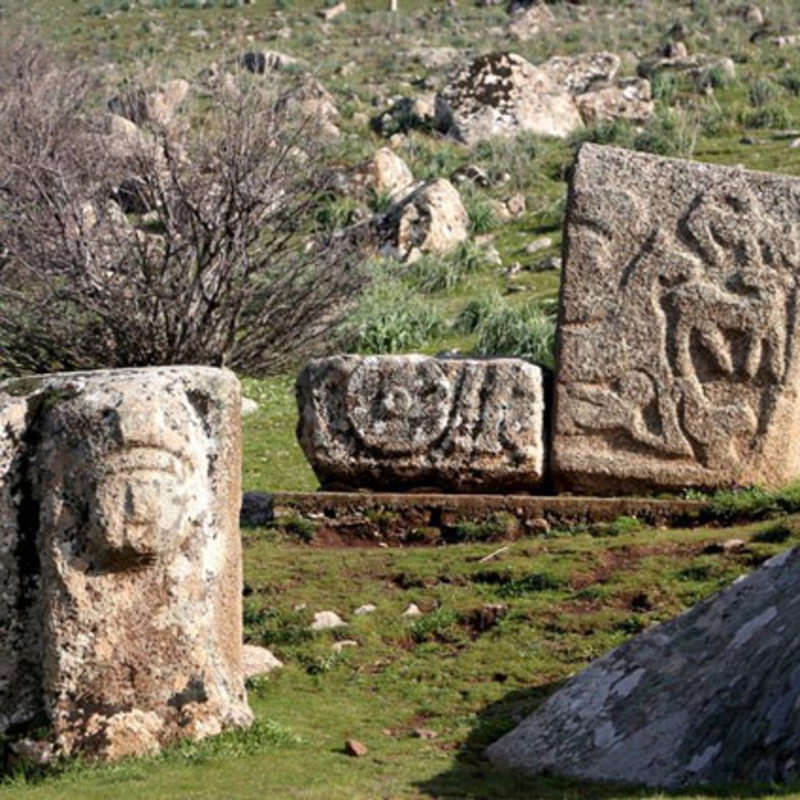 Included on UNESCO’s Temporary World Heritage List in 2012, Yesemek Open-Air Museum and Sculpture Workshop in Gaziantep’s İslahiye district exhibits sculptures belonging to the Hittites and offers visitors the chance to observe every step of the sculpture-making process

The Yesemek Open-Air Museum and Sculpture Workshop museum, which is situated in the village of Yesemek, extends across 100 decares and displays over 300 drafts of basalt sculptures and reliefs. German Institute of Eastern Research archaeologist Felix von Luschan discovered the site in 1890 while he was conducing excavations on the Zincirli Mound. Many sculptures spread over a vast area were unveiled following the excavations undertaken by Professor Bahadır Alkim between 1957 and 1961 and archaeologist İlhan Temizsoy between 1989 and 1991. The Yesemek Open-Air Museum and Sculpture Workshop showcases how the sculpture workshop was managed, as well as the techniques and materials used in the sculpture-making process. The museum displays sphinxes, sculptures of guardians and winged lions along with reliefs of mountain gods representing the Nur Mountains, war scenes and architectural pieces.

Among the many sculptures displayed at the museum, sculptures of a half bear-half human create, sphinxes with lion bodies that originate from ancient Egypt and the reliefs that describes a war scene with a chariot stand out.

In his statement to an Anadolu Agency reporter, Yesemek Open-air Museum attendant Haydar Çiçek explained that the region is called "the field of sculptures" among locals. Stressing that besides the more than 300 sculptures that have been discovered so far, there are thousands of sculptures spread across the area that have yet to be unearthed, Çiçek said, "The open-air museum displays every step of the sculpture-making process. Visitors, especially those who study sculpture at university, can observe the whole process at our museum." Çiçek, who informs visitors about the sculptures and reliefs in the area, noted that foreign tourists mostly know about the site but it should be introduced to Turkish tourists as well. Offering insights about the history of Yesemen, he continued, "Before carving the sculptures, dry wooden pieces were placed between holes in the rocks. These wooden pieces were dipped into water and as the pieces that enlarged the stone cracked due to the pressure. With the help of sledgehammers and similar tools, the rocks were broken into pieces." He noted that the stone blocks were transferred to the workshop near the mountain to be carved into sculptures. "First, the drafts of the sculptures were drawn on the stone and then the details were carved out. The last touch-ups of the sculptures were completed inside the building where the sculptures would be placed," Çiçek said, adding that it is also possible to see the drafts of the sculptures at the open-air museum.

Ali Çiçek, who has been taking part in the excavations of the area for many years, said that Yesemek holds an important place in the Anatolian Cultural Assets Inventory. However, the site has not been promoted for many years for various reasons. He stressed that he expects more tourists to visit the site in the future.

According to the information gathered from the Gaziantep Culture and Tourism Directorate, the region began operating as a sculpture workshop when Suppiluliuma I, the king of the Hittites, conquered the area sometime in the 12th century B.C. The sculpture workshop, which was closed for a while due to the organized attacks by the Phrygians on Hittite cities around Anatolia, was re-opened after the ninth century B.C. by the Sam'al Kingdom. When the Assyrians conquered the Sam'al Kingdom in the last quarter of the seventh century B.C., documents indicate that the workshop and the quarry did not operate and the region was deserted. As the workshop and the quarry operated during political chaos, the findings discovered in the area bear the traces of Assyrian, Syriac and Hittite cultures, besides the Arameans who settled in the region in the following period as well. As it is the home of many artifacts belonging to different civilizations, the museum is very important in terms of culture and art.