Rethinking the museums of the future: Examples from Turkey and the UK 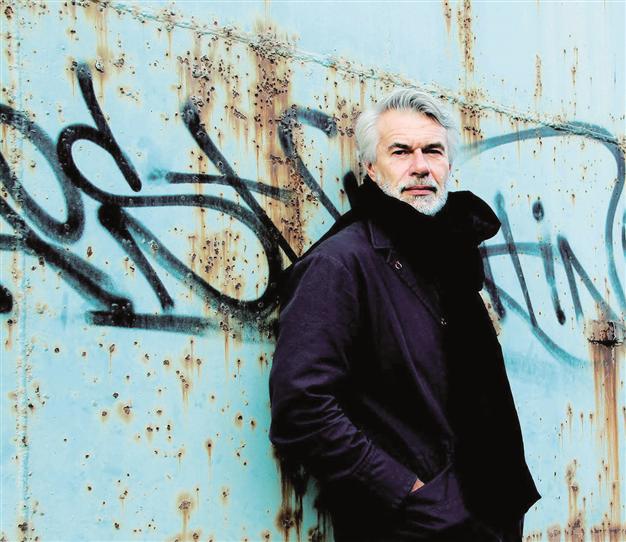 Public and private art museums are in an effort to go beyond their traditional functions. During his Istanbul Modern talk, Tate Modern’s director Chris Dercon gave insights into what the museum of the future will be

"Museums are places that can answer the questions Google can't," said Chris Dercon, the white-haired and visionary director of Tate Modern during Istanbul Modern's "Museums Talk: From the UK" program last Friday. His reflection on the physical and social evolution of 21st century art museums demonstrates that they have become "a place for encounters" rather than "vast monolith space."

A Belgian art historian and filmmaker, Dercon joined London's Tate Modern in 2011 and held top positions at the Museum Boijmans Van Beuningen in Rotterdam and the PS1 Museum in New York before his eight years at Haus der Kunst in Germany. His first show at the Munich-based museum featuring Maurizio Cattelan's life-like sculpture portraying Adolf Hitler kneeling in an empty room confronted with Germans. However, the 57-year-old director's risk-taking nature leads him to come up with new innovations in the field of museology. "We have to be courageous if we want to talk about the future of museums," he said, while emphasizing that rethinking of museums is not limited to making them "bigger and bigger."

On the South Bank of the River Thames, the Tate Modern, which opened in 2000 and welcomed 5.3 million visitors in 2012, making the gallery the most popular modern art museum in the world, can be a good start to discuss transformation of museums. Interestingly enough, the Tate Modern shares a similar history with Istanbul Modern, Turkey's first private museum on contemporary and modern art in Tophane, an amazing waterfront location where the Bosporus and the Golden Horn meet. What Dercon mentioned during the event indicates the motto of his life, "Once the order has been found, everything can be changed around." Supporting his vision, the two iconic venues occupy unused buildings - the Tate Modern was converted into an art gallery from the Bankside Power Station and Istanbul Modern is a fully-equipped museum transformed from a former customs warehouse. The cavernous oil tanks that once fueled the mid-century power station that now houses the Tate Modern opened as film and performance space and a new extension building will be soon added to the south of the existing gallery. Additional examples are also seen in Turkey. The contemporary art space SALT's second branch, SALT Galata, is a former 19th century imperial Ottoman Bank and Galeri Mana is a converted mill dating back to the same period. These bustling art galleries are drawing the attention of foreign media circles, too. An earlier BBC program "Heart of Turkey" described Istanbul Modern as "the museum that changed Turkish art." Aside from these, the Kocaeli-based SEKA Paper Factory, one of the country's first industrial enterprises will reopen as Turkey's first and expectedly Europe's biggest paper factory museum once its restoration is completed and the infamous Diyarbakır Prison will be converted into a museum.

Dercon further argued that museums play a vital role in "connecting people" and "spending time with others." Among the main motivations of visiting museums, socializing comes first with 45 percent followed by learning with 29 percent, aesthetic experience with 14 percent and getting inspiration with 11 percent. Referring to an earlier the Economist article describing museums as "temples of delight," he asserted that people search for something more than a portrait hanging on giant wall with an information card next to it. To freely engage with art, Tate Modern's Turbine Hall previously hosted a sleepover party for a large number of young people. Similar practices for children are also observed in Turkish art museums. "The museum of art does not see any longer its growing audiences as a hindrance," Dercon reiterated. For him, the future museum has a "blurred distinction between producers and receivers" and is where "culture is massively produced and entrenched with the fabric of daily life."

During his talk, "digitalization" and "cultural participation" are the two other main points that he put focus on. The digitalization of museum collections and archives is a powerful tool to appeal to more visitors. "The more you are online, the more you have stories," he expressed, highlighting the need for digital environment to showcase what museums offer for visitors from all around the world. The Tate Modern's collaboration with the Silent University, a knowledge exchange program initiated by Turkish artist Ahmet Öğüt is also worth mentioning. As an autonomous platform designed by and for refugees, asylum seekers and migrants, the Silent University was inaugurated at the Tate Modern and enjoyed a year-long residency there for holding weekly workshops and lectures. Praising the Turkish artist's ambition and success, he stated, "The more cultural participation, the more people are happier."

It seems that the ongoing initiatives on "reinventing museums" both home and abroad will ultimately break down the biased perception, seeing them as boring and cold spaces. Many museums have already gone beyond merely displaying artifacts and other traditional functions because the demands of visitors are urging them to change. Dercon said, "Culture is a plural and transparent system," so why can't museums be?