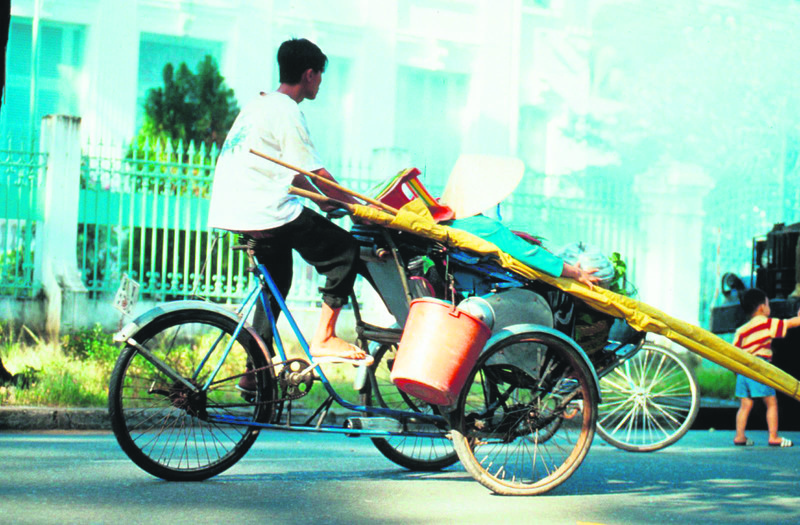 With galleries and art exhibitions that never cease to attract both art lovers and curious eyes, SALT Beyoğlu has managed to become a prominent part of Istanbul's arts and culture scene. The gallery will give its faithful visitors a year filled with movies

To kick off 2015, SALT Beyoğlu will be screening a different movie every Thursday for one whole year. That's right, one movie every Thursday. Cinema Thursdays, or "Perşembe Sineması," will not be active during the summer months from July to September, but will take place in two parts; a March to June series and an October to December series. A total of 33 movies will premier during the series, all of which will be shown at SALT Beyoğlu's open theater Thursday nights starting at 7:00 p.m. The best part about these movies is not only the fact that they are completely free of charge to the public, but that the movies are specifically chosen centered around a specific topic themed with cultural details.

The films chosen for Cinema Thursdays have a theme, as does everything in the dainty gallery. The movies that are to premier at the gallery during the March to June series will be focused on the sanctions that city life has on individuals, environment and the community. The movies that have been selected for this series are productions from all over the world focusing on the central theme with different perspectives. Various regions and time spans collide in the documentaries and features in SALT's selection of movies. The first movie for the March to June series is a Chinese movie called "Shijie" (The World), which will premiere on March 5.

The second series from October to December will focus on Turkish movies during the 1980s centered on the political tension that leads to faster urbanization and spatial decomposition of urban life. The list for this series goes hand in hand with SALT's "Nereden Başlasak?" (Where Should We Start?) project, centered on the purposely avoided and elided events during the 1980s.

All 33 of the movies to be screened this year will be shown in their original language with Turkish and/or English subtitles. The movies are free of charge to anyone who wants to enjoy their Thursday night at the cozy gallery. The gallery will not be taking reservations so you better show up early to get the best seats. So grab some popcorn and prepare yourself for a series of culturally elevating movies this year.

"Shijie," literally meaning the world in Mandarin, is focused on the lives of a group of friends who work as dancers at a park some 17 kilometers outside of Beijing. The park, which is named Shijie, is constructed of famous landmarks from all over the world and was built to give visitors the chance to see the world without leaving Beijing. The young group of dancers perform at the park every day among the makeshift landmarks that include Egypt's Pyramids, France's Eiffel Tower, India's Taj Mahal, Italy's Leaning Tower of Pisa the United Kingdom's Big Ben and the United States' Statue of Liberty. The 139-minute film takes viewers into the lives of the individuals as the massive park starts taking a toll on their lives.

"The Pruitt-Igoe Myth" is a 79-minute documentary detailing the history of a public housing complex built in the middle of St. Louis, Missouri. The film is centered on the events leading up to the decision to demolish the complex with a highly-publicized implosion. The Pruitt-Igoe housing project takes a closer look into the social and economic issues of the era in relation to the rapid downfall of conventional public housing in America. Seasoned with a personal narrative and intriguing stories about the residents in the project, "The Pruitt-Igoe Myth" gives viewers a deeper look into the politics of the time.

This Hindi film is focused on the day-to-day life of a young boy named Krishna living in the red-light district of Bombay. It tracks his personal journey of learning to survive on the streets while trying to earn the 500 rupees that he needs to get home. The film chronicles his encounters with drug dealers, pimps, prostitutes and more children like him who are living unprivileged lives

"I Am Cuba" gained popularity after American filmmakers rediscovered it nearly 30 years after it was filmed. The nearly forgotten movie is centered on the suffering of Cubans, specifically focusing on four main stories. A seemingly high-class elite woman, who actually lives in a slum, a farmer who is unwillingly forced to burn his crops and vacate his home, a rebellious student full of rage and an ordinary farmer who joins a rebel group. These stories are told from the narrative of a woman who calls herself Cuba as they mark the steps of a nation toward a revolution.

"Xich Lo" takes place in the center of Ho Chi Minh City where a young pedicab driver (cyclo) gives rides to people in the city, a job that scarcely allows him to provide for his two sisters as well as his elderly grandfather. After having his bike stolen by a local gang the young boy descends into the grim depths of the corrupt city. The cyclo finds himself in a gang where the promise of easy money fools the young boy into working under the leader known as Poet. He soon finds out that he is not the only one who has fallen for the tricks and that his sister is also in the ring of crime.

April 23: Pom Poko directed by Isao Takahata, 1994* The animated film "Pom Poko" is about a community of magical, shape-shifting raccoon

dogs that desperately struggle to prevent their forest home from being destroyed by urban development. A special screening of the movie with a Turkish voiceover will be screened at 3:00 p.m. for anyone who wants to enjoy the movie in Turkish or take children to see the movie. April 30: Les Rendez-Vous de Paris (Rendezvous in Paris) directed by Eric Rohmer, 1995 Set in the city of love, "Les Rendez-Vous de Paris" follows the story of three romantic scenes taking place in different parts of the city. The three episodes are called "Le Rendez-Vous de 7 Heures" (The Rendezvous of 7 Hours) where a student discovers that her no-good boyfriend is dating another women, "Les Bancs de Paris" (The Benches of Paris) about a mysterious woman who has meetings with charismatic literature teachers, and "Mere et Enfant 1907" (Mother and Child 1907), which chronicles the story of an artist who is seduced by a stranger.

May 7: Hamara Shahara (Bombay, Our City) directed by Anand Patwardhan, 1985

May 14: Tigre v Meste (Tigers in the City) directed by Juraj Krasnohorsky, 2012

"Tigers in the City" is about three friends who enjoy spending their free times in a bar in the Bratislava City Zoo, but feel they may be missing something in their lives. All three of the friends - Badger, Hyena and Pigeon as they are called - are on the search for a soul mate. When one of the three finds the woman of his dreams he gives up everything, including his friends, to pursue the femme fatale. Unbeknown the love-struck man is that his perseverance has set in motion a series of unpredictable changes in destiny, which lead straight to impending catastrophe.