Great union of Islamic art from word to pencil 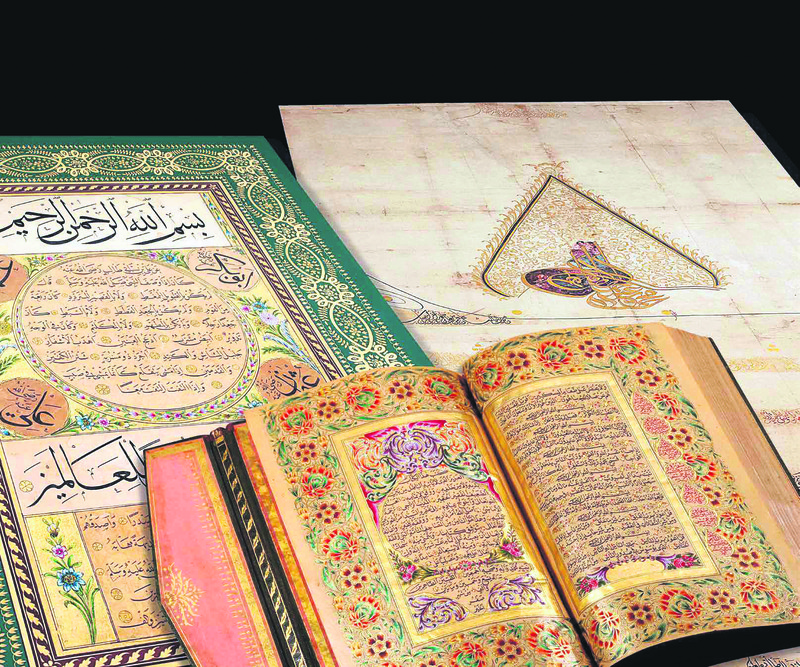 The Islam Culture and Arts Platform has organized an exhibition that features 99 artworks including firmans, hilyas and various kinds of documents ornamented with calligraphy

Organized by the Islam Culture and Arts Platform with contributions from the Doğuş Group, Mimar Sinan University and the Istanbul Art Museum Foundation, the exhibition will display a precious collection featuring centuries old Qurans and Dala'il al-Khayrat, along with firmans, calligraphy plaques and new and old manuscripts, and share a historical resource and accumulation. The exhibition, which displays the historical and contemporary applications of Turkish Islamic art, will introduce 99 beautiful examples of Turkish-Islamic civilization. Hand-written Qurans that date to the ninth, 13th, 16th and 19th centuries originating from Kashmir, Iran, the Safavid dynasty, the Qajar dynasty, al-Andalus and the Ottoman Empire as well as 19th century Ottoman firmans and hilyas will be presented to the public for the first time through this exhibition.

The Secretary-General of the Islamic Culture and Arts Platform, Abdulkadir Özkan, has offered insights into the exhibition. He said, "Currently, 99 artworks including hilyas portraying the personality of the Prophet Muhammad and his stories are featured in the exhibition." He claimed that the exhibition bears importance because of the hilyas that will be displayed. Significant examples of contemporary calligraphy will be showcased. The exhibition also features artworks that will be exhibited for the first time, including an artwork of Süleyman the Magnificent.

While art lovers will get a chance to observe Ottoman firmans close up and read their Turkish translations, they will also learn about an important period of history through the artworks featured in the exhibition composed of pieces from Mehmet Çebi's collection. These official correspondences, which are considered objets d'art in art circles, will reveal the details of Ottoman art with their design and engravings. The firman collection includes the official request of Süleyman the Magnificent for the book that recorded Kilitbahir's corn needs and suppliers and the firman of Abdülhamid II, in which he thanked the accountant of the Ministry of Foreign Affairs Haçik Efendi for his outstanding accomplishment, stating that he will be promoted. Apart from these, firmans of Mehmed IV, Ahmed II, Mustafa II, Ahmed III, Osman III, Mustafa III, Abdülhamid I, Selim III, Mustafa IV, Mahmud II, Abdülmecid, Abdülhamid II and Mehmed Reşat will also be displayed.

"The Islamic Culture and Arts Platform" exhibited the Aşk-ı Nebi (Love for the Prophet) exhibition in the Topkapı Palace, the U.S., Argentina and Cuba following its debut at the Hagia Sophia in 2011. "Our aim is to make classical Islamic art re-read both in the West and East as well as in Islamic countries," Özkan said. He added that they want to make the elegant Islamic art popular once again especially during these times when Islamophobia is on the rise and Islam has been equated to militant organizations such as ISIS on the world agenda. "In this sense, this is a civilization project," he concluded.

The "Kelam'dan Kalem'e Büyük Buluşma" exhibition, which will revive the history and art of the period, will provide us with a chance to pass on the best examples of Turkish Islamic art to future generations. The exhibition will offer an insight into the works of important calligraphists that Ottoman sultans paid extra attention to, as well as the calligraphic styles of Naskh and Thuluth. The exhibition "Kelam'dan Kalem'e Büyük Buluşma" will be open to visitors until March 29 at the Mimar Sinan University with contributions from the Doğuş Group, Mimar Sinan University and the Istanbul Art Museum Foundation.
Last Update: Mar 04, 2015 10:04 am
RELATED TOPICS