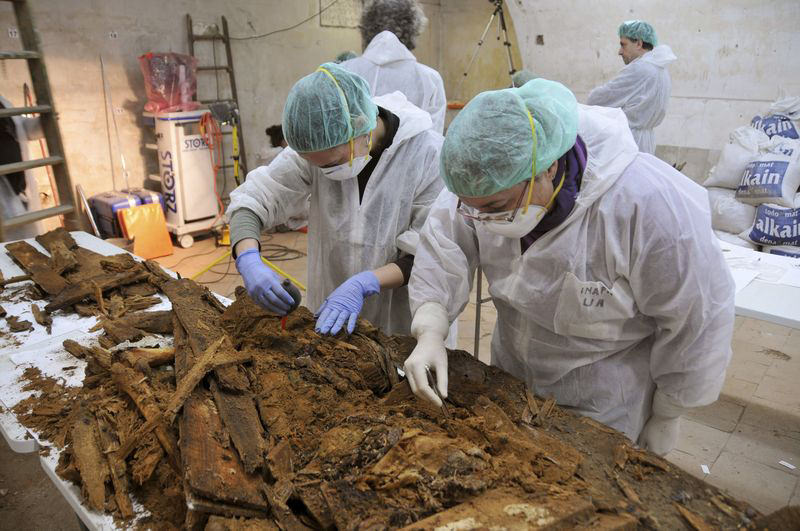 | Photo: EPA
by Daily Sabah with Wires Mar 17, 2015 12:00 am
Experts said on Tuesday that they have found the tomb of the Spanish literature giant, Miguel de Cervantes, in Madrid's Convent of the Barefoot Trinitarians, about 400 years after his death.

The Spaniard Cervantes, best-known for his work Don Quixote, died in poverty in 1616 and his coffin was later lost.

In January, scientists working at a cloister in Madrid revealed they had found a coffin with the initials MC on it, and that it was highly likely it contained the bones of Cervantes.

"Everything coincides to lead us to believe that Cervantes is there," a forensics expert, Francisco Etxeberria, said at a news conference on Tuesday in Madrid, Reuters reported.

Scientists said the remains of the writer's wife, Catalina de Salazar, were also found among a number of adult bones matching some people with whom Cervantes had been buried, before their tombs were moved into the crypt.

The bones were among a number of remains found in the tomb, some of which are believed to be those of other people, according to German Press Agency. As the remains are in a bad state of conservation, individual identification of the writer is difficult.

Some thirty archaeologists, forensic scientists, historians and technicians took part in the project to identify the bones, in an operation financed by the city authorities in Madrid.

The cloister where he was buried was rebuilt and extended several times, making it difficult to ascertain exactly where the writer had finally been laid to rest.
Last Update: Mar 17, 2015 5:49 pm
RELATED TOPICS