Master of choreography to present a visual feast in Istanbul 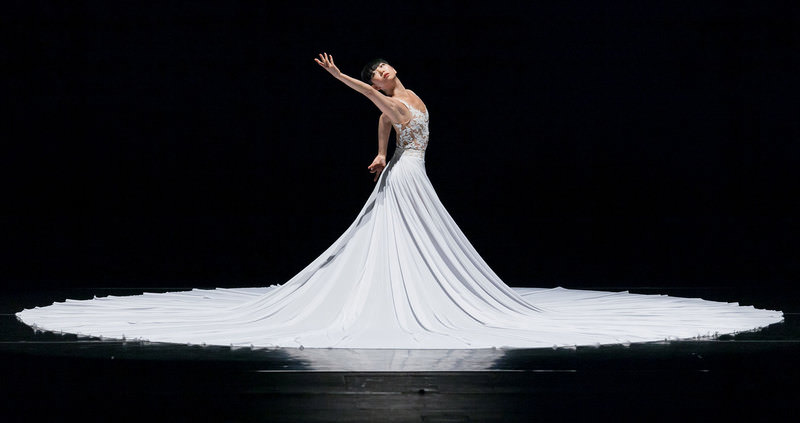 Called a ‘master of visual composition' by Dance Magazine, Jessica Lang is a choreographer and the artistic director of the Jessica Lang Dance Company. The group will perform in Istanbul on April 9-10 at İş Sanat's performance hall

Founded by Lang in 2011, Jessica Lang Dance Company (JLD) has been performing at distinguished venues and festivals as a New York-based dance company. As part of its winter/spring 2015 world tour, JLD will perform in eight cities including an international engagement in Istanbul to inspire global audiences with the beauty of dance and music. With a well-rounded repertoire including "Lines Cubed," "White," "Mendelssohn Incomplete," "The Calling," "Scape," "Aria" and "Among the Stars," JLD is ready to present a visual feast to audience in Istanbul on April 9-10 at İş Sanat.

For those who want to know more about JLD, Daily Sabah conducted an interview with the leader and founder of the group, Jessica Lang.

Daily Sabah: What or who gave you the idea for the Jessica Lang Dance Company?

Jessica Lang: In 2010 I had been working for 11 years as a freelance choreographer. I worked with various dance companies like Joffrey Ballet, Birgmingham Royal Ballet and a lot of companies around the U.S. And I started to feel like I must do something to reach my potential. I was always the guest of the companies and could never reach my potential because there were not always the same dancers. I was not working with the same group of dancers. I was constantly trying to get to know people and then the relationship would be over after two weeks and then I moved on to another company. So I became restless, and simultaneously the Joyce Theatre in New York nominated me for a grant. They gave me money and time and space. And I was awarded this grant. And that was the seed money for the beginning of the company. And that was the opportunity to create a group of dancers. With that, multiple things had to happen. A gentleman stepped forward who is a patron of the arts and familiar with this environment and offered to make my nonprofit organization in the U.S. He settled up my business structure and financial contributions to sustain us. And then we took part in Jacob Pillow's Dance Festival and presented our company as a debut. So in 2012 we presented the Jessica Lang Dance Company for the first time. So this natural, organic process led us to these days. If only one of these opportunities had not existed then we could not have managed it.

D.S: As a professional you have created a lot of different choreographies. Which is your favorite?

J.L:You know, maybe it is funny but it is like children. I don't have any, but I cannot pick up one as my favorite. Each one is so valuable to me. Maybe each one has a different difficult process. Or it might be an easy process. I feel like my memory is more tangible with the one I most recently created, "The Wanderer." That is very special to me because I had been thinking about it for a long time. I also really like "The Calling," which is really personal and beautiful. I also love the piece that I made for the Birmingham Royal Ballet because I think the process was so genuinely wonderful, from the dancers to the cast, musicians, costumes, lighting and all the other components. So these feel really embedded in my heart.

D.S: Were there ever days you maybe didn't want to dance or create any choreography, and on those days, what pulled you out of that mindset?

J.L: Hahaha, well, you know, sometimes you just want to do something else and feel like you miss it. Creating is a hard process, you need to change your mind, take care of yourself, treat yourself and stimulate a different energy. Of course sometimes there can be exhaustion or frustration, that's so natural. But it never turns to hate.

D.S: Who is your inspiration in the dance world?

J.L: In terms of the dance world, I can say that definitely my company is. Dancers I have in my company are really my inspiration at this point. And my husband is a dancer, too. I am really inspired by him as well. As far as a career, I truly admire Mark Morris. I believe he is really successful throughout the U.S. His vision for his own company is really inspiring. He is a very active person in directing and creating. I think he has a really unique business model. He is able to be creative constantly. I find all these people admirable.

D.S: Do you have any special preshow rituals?

J.L: As a company we hold hands just to connect and feel each other. It's a kind of being focused before the performance. That's it.

D.S: Can you share a little bit about the repertoire of the upcoming Jessica Lang Dance performance in Istanbul?

J.L: Well, we'll open the program with "Lines Cubed." It is inspired by the painter Piet Mondrian. We follow that with the women trio called "Aria." And then we continue with "Among the Stars," a folkloric tale that reflects deep emotions and has a poetic style. And "The Calling," which is a beautiful solo, very spiritual. And we finish the program with the piece called "Scape," which I created for the Kennedy Center last year with the National Symphony Orchestra. It's a beautiful dance piece. And the second night, the program only varies in two pieces. We will add a gentle piece called "Mendelssohn Incomplete." It's incomplete because I have not finished the work. It's only one movement. It's about Mendelssohn's piano trio in D. And the last one is "White." I created this piece on film like a duet of slow motion and real time.

D.S: Where do you see Jessica Lang Dance 10 years from now?

J.L: My goal in the near future is to have a space in New York in Queens, which is the borough where I live and where we based our company. Much like I have talked about Mark Morris, he is very encouraging to me to make a difference in Queens much like he has done in Brooklyn. So I hope that we will have a school and space that I can use and create while I am still young enough to have a strong vision and to really get the most out of my heart. So that's where I see the company, still touring, performing and connecting with the people in our community.
Last Update: Mar 23, 2015 11:49 am
RELATED TOPICS