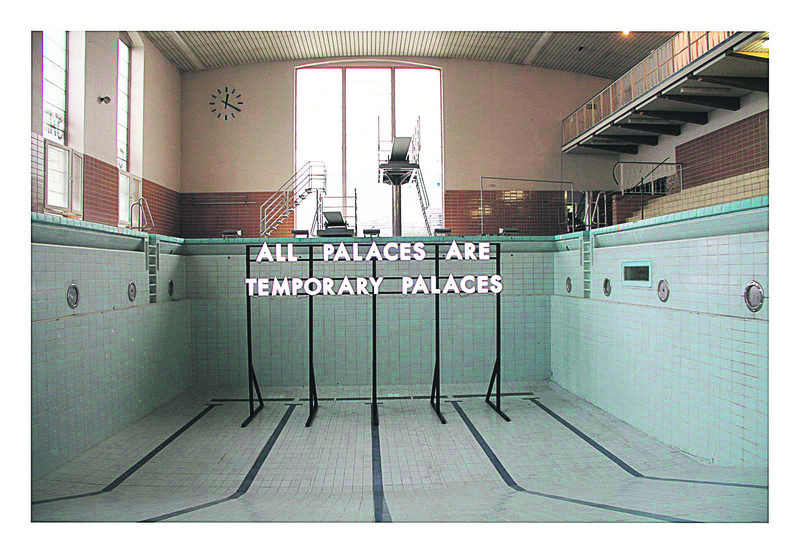 A few days ago I entered through the door of a building on Turnacıbaşı Street, close to Beyoğlu's Galatasaray Square. Neşe Apartment offers an impressive view of the neighborhood: the adjacent Galatasaray high school, established by Sultan Abdülaziz in 1868, looked beautiful under the sun. It was a bright April day and the city outside was silent.

Inside the apartment there were works by Scottish artist Robert Montgomery, as part of his first Istanbul solo show at ISTANBUL '74. On view until April 18, his solo exhibition features photographs of Montgomery's billboard installations as well as his woodcuts.

Montgomery made a name for himself with his poems he had illegally placed on advertisements in big cities. "His very pleasing verse is presented in white typography on a black background, screaming out ideas about beauty, consumerism and hypocrisy, among other things," is how The Independent's Matilda Battersby described his poems in 2012. Trained at Edinburgh College of Art, Montgomery places himself in the post-situationist tradition. His "Words in the city at night" project began in 2005; for those images he hijacked advertising spaces in the city and covered billboards with his verse. Montgomery's work is also popular on social media - I have come across one of his most famous little poems ("THE PEOPLE YOU LOVE BECOME GHOSTS INSIDE OF YOU AND LIKE THIS YOU KEEP THEM ALIVE") in numerous Twitter and Facebook profiles. (Montgomery's own Twitter handle is @MontgomeryGhost.)

"Istanbul has inspired me since my first visit in 2010," Montgomery said in a press release. "I love the mixture of voices and the mixture of cultures - the call to prayer at sunset mixing with the sound of Nirvana songs from the cafes of Galata for me sums up the wonderful cultural diversity and spirituality of the city."

I talked to Demet Müftüoğlu Eşeli, the founder of the international arts and culture platform ISTANBUL '74, to learn about the story behind the exhibition. Eşeli is also the creative head of IST. Festival, which hosted names such as Carine Roitfeld and Tilda Swinton in the past.

"Robert and I decided to collaborate on his first solo show in Turkey during his participation in our Istanbul International Arts and Culture Festival last year with his trademark 'fire poem' performance," she told me.

"This exhibition is the most comprehensive show of Robert Montgomery this year. It has a retrospective of the most important light works and a nice group of watercolors and a group of the LA billboard poems he did on huge billboards in Los Angeles last summer. Also on view is the documentation of the Fire Poem he did in the gardens of the Louvre."

"Montgomery is known with his continuity of keeping the conceptual art traditions alive by using texts and poems as the base of his works," the exhibition program explains. "Wood engraving, watercoloring, flames, light installations and billboard installations are some of his prominent techniques. Believing that the poems will find their place back in today's very contemporary world, Montgomery's works intensely reflect with poetry. Montgomery's works, strengthened through collective subliminal topics, attract a wide range of audience with their strong texts and unique presentations."

I asked Eşeli about which aspect of Montgomery excited her the most. "Robert's works are timeless," she said. "They can lead you to a very distant memory from the past and sometimes even create a future projection."

"Robert doesn't believe in social, political or religious control of any kind. He thinks that the cities should be melting pots of different opinions, cultures, nationalities, religions, atheisms, philosophies and ideas all whirling together in one giant peaceful Kaleidoscope."

"His works speak to people quietly, in a sort of intimate but distanced voice and this fascinates me," Eşeli added.

Montgomery's Istanbul show features numerous light installations that were produced in the last five years. Also on view is his special new work about Istanbul which depicts a pickup truck carrying Montgomery's verse.

"It is a very typical truck and it carries Montgomery's 'Poem for the City of Istanbul' which reads: EVERYTHING IN THE CITY IS PERFECT, THE VOICES IN THE STREETS ARE SACRED MUSIC, AND THE STREETS BELONG TO NO ONE. That piece is a little love poem to Istanbul. We have a print of it in the show."

With their poetic critique of capitalism, advertisements and urban life, Montgomery's work has earned him numerous fans in the last decade. His work was shown at venues including the Venice Biennale, the C24 Gallery in New York and Galerie Nuke in Paris. He realized outdoor light installations on the site of the old US Air Force base at Tempelhof in Berlin, and at Kochi-Muziris Biennale in 2012. Galerie Nuke in Paris and monokultur in Berlin have published Montgomery's monographs. His work features in the permanent collection of The Museum of Fine Arts in Houston, Texas. Magazines like Art in America, Nuke and Dazed & Confused published his art.

"The audience showed great interest in the show and the response so far has been excellent," Eşeli said. "Our show received lots of interest from the international audience as well as the locals, which pleases us in ISTANBUL'74." I asked her about Montgomery's popularity on social media. "When Robert started producing his works the Internet was not as big as it is now," Eşeli explained before pointing to the importance of the interaction between Montgomery and his digital audience.

"If we review audience's collaboration from the artist's point of view, this interaction contributes to the worldwide circulation of the artwork. And that is precious in a very personal way. Our times allow us to interact with one another immediately."