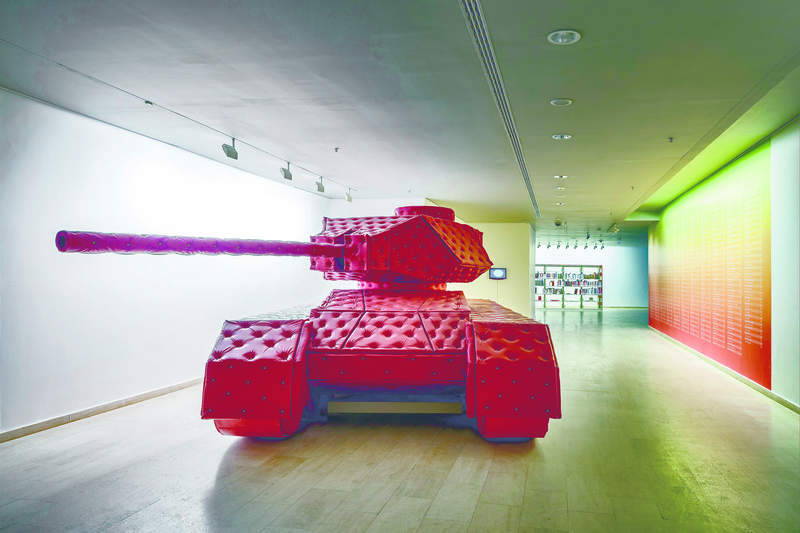 Sakıp Sabancı Museum is hosting a new exhibition titled "Buluşma...Reunion," which brings together works by 20 artists in many disciplines, from photography and painting, to documentary filmmaking and installations. They are professional artists who have gained prominence at international bienniales, expositions and exhibitions. "Buluşma...Reunion" will continue until June 26.

Sakıp Sabancı Museum Director Nazan Ölçer addressed the audience at a press conference on Tuesday, and said, "These professional artists who have found their own artistic path come together at the "Buluşma...Reunion" exhibition for the first time at the Sakıp Sabancı Museum. Exhibitions are among the most powerful ways of communicating a theme to society, and they are invaluable in providing an opportunity for artists to showcase their works and take bold steps in forming their personal languages. I firmly believe that this exhibition will resound with its youth and energy."
The 20 participating artists, who are graduated from Sabancı University, produce works using different media while distinguishing themselves with their common determination to produce in the art world, where maintaining permanence and continuity is a constant challenge. Here are profiles of some of the featured arts of the exhibition, which is spread across galleries on three floors.

A native of Istanbul, Pozantı received a Bachelor of Arts from Sabancı University in 2004 and a Master of Fine Arts from Yale University in 2011. Her art encompasses painting, sculpture and collage as well as digital animation. Through these varied platforms, she explores questions about technology, language and data systems, as well as the possibilities of space mapped out by the body and the screen.

Born and raised in Kayseri, Soyuer received a Bachelor of Arts in visual arts from Sabancı University and two Master's in art that she received in 2006 and then in 2011. Currently a doctoral candidate in cinema, she also works as a visual communication design lecturer at a private university in Istanbul. In her art, she likes to use, combine and break ready-made objects. Manual production and craft are valuable for her practice. An important aspect of her works is the organic, social and architectural relationship between the piece and the space. She tames uncomfortable and "aggressive" materials, such as sharp razors, or concepts alluding to disabilities that are mentally disturbing through repetitive processes resembling lace making. The social effects of gender roles, traditional arts, childhood consciousness, dreams, instincts and spiritual trance constitute the inspiration and/or subject matter of her works.

Born in Istanbul in 1977, Tan is his family's third generation of artist. At a very early age, he showed a particular interest in the arts and started working at his father's, Bihrat Mavitan, atelier (workshop). Tan has produced sculptures that have been exhibited in public spaces for the Kadıköy Municipality as well as for Boğaziçi University. His works have been exhibited at various venues in Florida, New York, Chicago, Ankara and Istanbul. In 2012, Tan Mavitan held his first solo exhibition titled "There is No Time" at Siyah Beyaz Art Gallery in Ankara. He has won several awards in national and international competitions in animation, design and sculpture. He lives in Istanbul, and continues producing art in his studio at Simotas Building in Kuzguncuk.

Born in 1983 in Istanbul, Algün Ringborg holds a Bachelor of Arts in Visual Arts and Visual Communication Design from Sabancı University and a Master of Fine Art from the Royal Institute of Art in Stockholm. The contrasting social and political differences between the make-up of both cities - Istanbul and Stockholm - as well as her movement between the two play key roles in her practice. Her work focuses on issues of identity, borders, bureaucracy, language and translation through appropriated and "ready-made" texts, dictionaries and archives.

Born in Istanbul in 1983, Ceritoğlu graduated from the Architecture Department of Istanbul Technical University (İTÜ), and then completed a Masters of Arts at Sabancı University. He is a member of the KABA HAT artist collective, and his artistic practice deals with the architecture and material culture that are subjected to urban regeneration. He makes furniture-like installations for homes and community centers from locally-found scrap material, which participants can use and modify. The work consists of long-term cooperation with the users of his work, focusing on frugality in design and creative production. In his other installations, he uses construction and demolition waste that has been scavenged from urban demolition sites to articulate a continuously growing global city and the urban politics that shapes it.

Born in Ankara in 1983, Süsler received her Bachelor of Arts and Masters of Art degrees in Visual Arts and Visual Communication Design at Sabancı University where she also studied as an exchange student at L'Ecole Supérieure d'Art de Grenoble, France. She attended an intercity artist exchange project, Art-homes, that took place in Istanbul and Munich, was awarded the Unesco Aschberg Bourse in 2012 and was selected for a residency program organized by the National Museum of Contemporary Art in Seoul, South Korea. In 2013, she attended Plato Sanat's "Artist in residence" program followed by an exhibition titled "Balat 2020." She has been selected to take part in the residence program offered by the Austrian Federal Chancellery in cooperation with KulturKontakt Austria in 2015.

Burcu Yağcıoğlu was born in Istanbul in 1981. She received her Bachelor of Arts degree in painting at Mimar Sinan Fine Arts University and her Master of Arts in Visual Arts and Visual Communication Design at Sabancı University. In 2008, she moved to London to pursue a Master of Fine Arts at Goldsmiths College, which she obtained in 2010. Yağcıoğlu's practice encompasses drawing, video, collage and painting. Her work explores the interrelations, shifts and influences between species, nature and fictions. Working with various visual systems and products, such as GIF animations, cookbooks and encyclopedias, she creates works that reflect information flow, perceptions of nature and prescribed cultural hierarchies.

Born in Istanbul in 1981, Kanar graduated from the Visual Arts and Visual Communication Design Program at Sabancı University, and received a Master of Arts degree in photography at the Academy of Performing Arts in Prague, Czech Republic. Working with a set of tools ranging from digital images and photographs to video images and alternative printing processes, he explores lens-based images from an ontological standpoint with particular reference to materiality, memory and space.

Born in 1985, Croze has developed an eclectic corpus of works, which comprise distorted objects, uses and situations, as well as absurd campaigns against different conventions of representations, genders and styles. In his recent works, he explores porosities in between several fields in order to constrain the limits of different artistic media. He is currently a studio member of SUMO in Lyon, France, where he is currently based.
Last Update: Apr 10, 2015 1:39 am
RELATED TOPICS