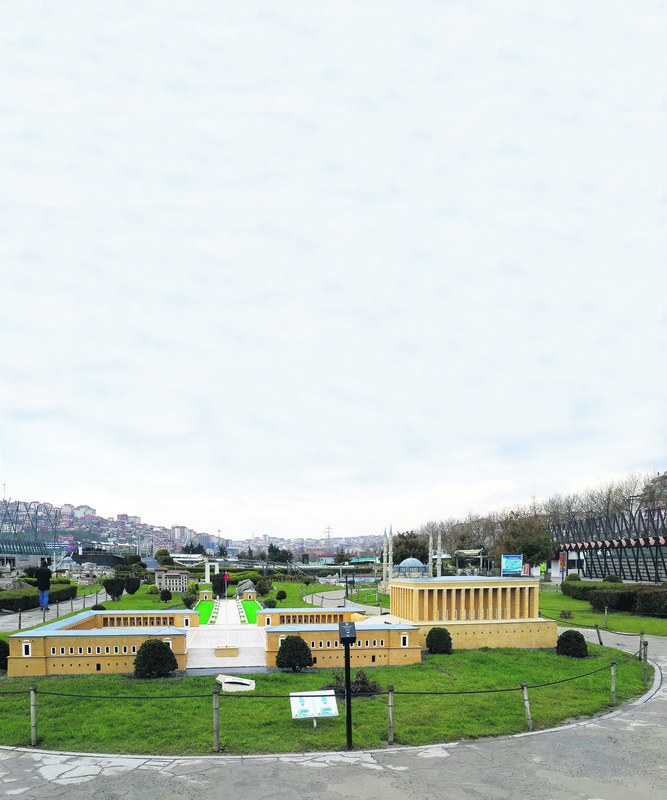 by Zeynep Esra İstanbullu Apr 10, 2015 12:00 am
A miniature of "Anıtkabir," the mausoleum of Mustafa Kemal Atatürk, displayed at the Miniatürk was renovated in a sixth-month period. Located near the Golden Horn of Istanbul, the park displays the most important miniatures of the well-known Ottoman and Republican-era works including a small replica of the Anıtkabir designed eleven years ago. A team of seven restorers repaired the miniature currently on display at the entrance section of the park. The miniature of the Selimiye Mosque, the masterpiece work of Mimar Sinan, can be seen on the left, while the miniatures of the Turkish Grand Assembly, the Clock Tower of İzmir and the İshak Pasha Palace are featured on the opposite. The miniature of Anıtkabir is among the park's first pieces and was repaired for a couple of times before. This time, the miniature underwent a comprehensive restoration at a model making workshop.

The Anıtkabir was built in Ankara in 9 years, from 1944 and 1953. Atatürk's mausoleum is one of the important buildings of the 2nd National Architecture Movement. As the commander-in-chief of the Independence War and founder of the Turkish Republic, Atatürk was honored with this mausoleum after his death. Spreading across an area of 15.000 square meters, the giant building was designed by Emin Onat and Orhan Arda. The road of lions extending 260 meters, the Victory Tower and the sarcophagus in the Hall of Honor are the most significant and meaningful architectural works of the early Republican-era.

The traces of many cultures and civilizations once existed in Anatolia are showcased at the Miniatürk. Visitors see the miniatures of the Galata Tower, the Haghia Sophia, the Rumeli Fortress, the traditional Safranbolu houses, the Dome of the Rock, the statues of the Nemrut Mountain and the Sumela Monastery. Some demolished artifacts such the Temple of Artemis, the Mausoleum at Halicarnassus and the Ajyad Fortress were brought into life at the park with their miniatures.

Representing the civilizations from the Antiquity, the Byzantine Empire and the Seljuks to the Ottomans, the architectural heritage of over 3,000 years are kept alive at the park drawing scores of visitors each year.