‘We were all born artists,' TRT's nostalgic actor says 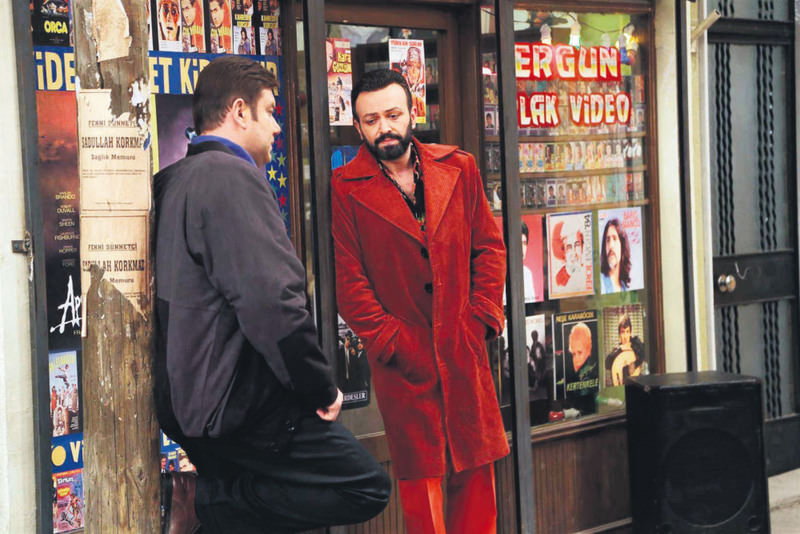 The popular actor, Serhat Kılıç, currently starring in state-run TRT TV series ‘Seksenler' (The ‘80s), which depicts the lifestyle and environment of the 1980s, also holds jazz concerts and opens horizons for younger artists through his arts school in Ankara

Actor Serhat Kılıç runs an Ankara-based acting, writing, singing and dance school named Okul for interested art lovers over the age of 17. Speaking to Daily Sabah, Kılıç said writing classes cover movie and television series scriptwriting and advertisement writing. Okul offers expert lecturers from different ages and perspectives. Among a group of 18 lecturers, philosophy classes are given by Middle East Technical University's head of the Philosophy Department. Theater artist Fulya Peker, who lived in New York for 12 years, attends acting classes. Kılıç said experienced author and playwright Özen Yula and Emre Koyuncuoğlu, an important figure in alternative Turkish theater are also among the training staff. "I am such a lucky person that our paths crossed. They all believe in me and said, 'yes, I will do my best.' They are all experts in their own fields and come from different ages and viewpoints," Kılıç said. The successful actor believes that everyone deserves to discover their inner talents. "I am very grateful to all the trainers working at this school. They come to Ankara every week. At first, they believed in my dream, now they believe in our students. The students also believe in them," he added.

Kılıç always dreamed of becoming an actor since his childhood. "I studied at Bilkent University with a scholarship. My graduation grade was high. I heard people saying 'you are very successful, you can do whatever you want.' But I did not have enough courage because I grew up without taking risks," he said. Later, Kılıç began spending at least one day to rehearse a single theatrical line. "I thought if I rehearsed like that, I would waste my time and decided to take to the stage," he added. Kılıç is not only interested in acting, but also teaching. "I think I have a talent for teaching. I like it. Some actors are too lazy to train people, but I can teach someone for a whole day with patience. I also like speaking. If you talk too much with people, you may tire them. I am teaching so that I can consume my energy," he said.

Before he founded the art school, Kılıç was thinking of postponing his project for five or even 10 years. "I do not know, I was thinking of acting in a few TV series or movies. I had also decided to collect money. Three years ago I suffered an illness, but recovered before it developed further. I promised myself before I had an operation that I would open the school if it was successful," he said. Kılıç wanted to leave something good behind after he dies, so he contacted experts in London. The school's curriculum complies with the standards of Pearson and hosts lecturers from London. "Life flies away and I do not want to waste my efforts," Kılıç reiterated. His school presently offers courses in Turkish, but Kılıç said if there are at least 10 interested students, they might offer courses in English. "We have students from France and Germany. They are guided and trained according to their talents. Let's say a student does not have a musical ear or cannot dance, but is engaged in philosophy. We do not reject such students and give training in related fields," he said.

The school's motto is: "We were all born artists ... But then what happened?" The school accepts people over the age of 17 in order to raise awareness of art and to train artists in different fields at the international level. Following an interview, applicants who want to be a part of the training programs offered by the art school are admitted to the prep-school. During that time, instructors determine the students' improvable features and their goals. The students are channeled into certain branches of art according to their talents and continue their education.

Kılıç believes that everybody has certain talents. However, talent is also a curse when it is not used in the right way and at the right time. "I too experienced this at some point in my career. Our educational system is weak," he said. Kılıç underscored that the important thing is to teach people how to use their talents. "I see that actors are trained by unknown instructors who have not accomplished anything professionally. Those who can really teach something are acting in TV shows and working six days a week. Of course they do not work at universities as an instructor for two pennies," he said. Kılıç claims that an acting education is not prioritized in Turkey, but still, he is not hopeless. He said that he opened the school so that writers like Yaşar Kemal can be trained. "However, our education system does not allow this," he asserted. "On the contrary, it shuts down people with different personalities." He suggested that the education system wants to create a prototype. "For example a student who does not have any talent for music is forced to play the flute, or another one who has a talent for dancing is viewed as odd by his or her teacher," he said. Graduates receive a Pearson-accredited competence certificate listing the courses they took in the first two years. "Our 55 students will not all become the stars of the future, but art is not something that makes you an important person. You perform art because you feel it. Our courses are designed based on this view," Kılıç explained. He also said a new art school for students under 17 might be established in the coming years. "We want to teach people at an early age. We guide them to shape their future after we discover their talents with our expert teachers," Kılıç said.
Last Update: Apr 11, 2015 1:56 am
RELATED TOPICS