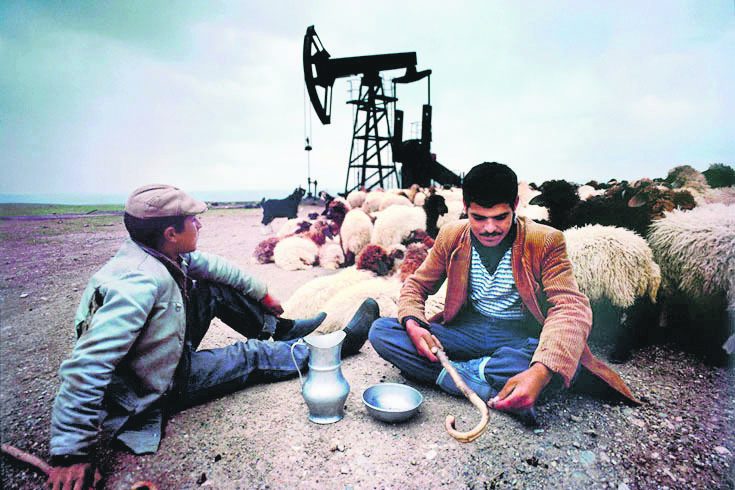 Turkey's legendary photographer Ara Guler, also known as ‘Istanbul's eye', has a life full of experience in various parts of the world with both famous figures like Picasso and ordinary people in the streets

"I am tired of taking photos." Turkey's most popular photographer Ara Güler laboriously takes a seat at Ara Cafe in Istanbul's bustling Beyoğlu district where he has been living since he was born. A bit grumpy and foul-mouthed, Güler has difficulty walking and more often than not needs someone to lean on.

Commonly referred to as "Istanbul's eye" - a term he does not like, as he refuses to claim ownership of the historical city - Güler admits certain weariness.

He made his name mainly with his black-and white nostalgic pictures of Istanbul that depict the city's wide range of emotions, photos that have since been turned into paintings that are showcased at an exhibition in the city's posh district of Bebek, which is open until April 18.

With his gray hair and beard, the 86-year-old Istanbulite looks like a character in one of his famous photos. Suffering from renal failure, the legendary photographer is full of stories about dialysis since he has to receive the treatment three times a week.

"That dialysis makes me stupefied," he said. "I cannot do anything three days a week, it takes four hours each time and it is unbearable." Still, Güler takes the occasional photograph. Earlier in the year, he took pictures of the ongoing construction of Istanbul's third bridge on the Bosporus.

Since his early childhood, Güler belonged to a social class made up of Turkish intellectuals. His mother came from an Armenian family native to Istanbul who owned several houses around Beyoğlu.

Güler's father became an orphan when he was 6-years-old following the mass relocation of Armenians from Anatolia at the turn of the century. However, he overcame much adversity later becoming a pharmacist in the Ottoman army during the Gallipoli Campaign in 1915. It was thanks to his father's connections that the young Ara managed to land his first job as an assistant film projector in one of Beyoğlu's many theaters. Indeed, in his father's drugstore, where theater artists would regularly gather to buy make-up material for plays, Güler met the founder of modern Turkish theater, Muhsin Ertuğrul, and was even able to work with him.

"[Güler] always wanted to be a playwright," wrote Nezih Tavlas in a 2003 biography on Güler called "Photo Journalist."

At when he was 22, Güler received his first camera, a Rolleicord II. His career as a photographer stated when he joined a local newspaper called Yeni Istanbul in 1950.

The legendary photojournalist fondly recalls when he went to cover a train accident at the end of 1950s. "Three carriages had collided and there were more than 90 dead on the ground," he remembered. "I saw an emergency handle and a hand that looked like it was stretching out 20 centimeters away," he recalled with enthusiasm.

He needed to show "the accident." "But to do that, I had to turn the body over," he said, similar to scenes in the 2014 American neo-noir movie "Nightcrawler," which portrays a cameraman who tampers with crime scenes by moving victims' bodies to get better shots.

He ended up soaked with the victim's blood. "Even my camera was covered in blood," he said. But he managed to get the picture he wanted. "I wanted to give meaning [to the photo]. He extended his hand but did not pull the handle, and the disaster started there."

"Do you know how dry blood smells?" he asks. "It is disgusting and sticky, dried blood sticks like glue."

The train accident occurred around the same time Güler meet world-renowned French photojournalist Henri Cartier-Bresson - through his connection with Romeo Martinez, editor-in-chief of Camera magazine between 1956 and 1961 - and became a member of Magnum Photos, an international photography collective.

By the end of the '50s, he worked for world-renowned magazines such as Time and Life in the U.S., the French weekly Paris Match and Der Stern in Germany, traveling around the world - from Pakistan and Kenya to New Guinea and Borneo. For instance, he was in Sudan in 1978 just before the second Eritrean civil war to report on clashes between rebel groups; just before the 1980 military coup in Turkey, Güler went to Mongolia, the Turkic peoples' homeland, to photograph eighth century inscriptions; and in 1990, he headed to Indonesia with his wife for a report on cannibal tribes.

But it is in Turkey that he made one of his most astounding discoveries: An ancient city called Aphrodisias in Turkey's western province of Aydin in 1958. As he was returning from a dam inauguration, his driver lost the way and ended up in a village where the locals incorporated antique architecture into their daily life.

In 1957, he was in France covering the Cannes Film Festival where he met legendary cinema figures such as American director Orson Welles, Italian writer Alberto Moravia and Spanish artist Pablo Picasso. While he was able to capture a picture of Picasso on the red carpet in Cannes, Güler had to wait until 1971 to take a true portrait of him. First, he tried to do so through one of Picasso's best friends, French painter Edouard Pignon, but to no avail. Then he attempted to contact Picasso through the well-known Turkish artist Abidin Dino. Again, however, he is unsuccessful. Güler was losing hope when he met the owner of Skira Publishing, Albert Skira, who had just signed a contract with the Spanish artist to publish his book "Metamorphoses et Unite." This meant he would pay a visit to Picasso's house, which Güler could not miss. He suggested to Skira that he join them during the four-day visit to photograph Picasso's daily life.

"Those four days broadened my horizons," Güler said to Tavlas. "Just like a magic wand. Picasso changed my view of the world."

Güler also photographed Winston Churchill, John Berger, Alfred Hitchcock and Salvador Dali, among many others. Ever the grump, Güler downplays the importance of the portraits he has made. "There is a guy, this guy is famous, there is a necessity to take this guy's picture and you take it," he said. "But [taking a picture of ordinary people in their environment] is like taking a part of reality and making it history. That is journalism."

'The sunset is the same everywhere'

Although Güler is quick to claim that "photography is not art," he does concede that it is as complex as "structuring a painting." "It is not just taking a picture of a sunset or a sunrise," he said. "The sunset is the same everywhere, even the sun itself is the same one. [But] you cannot think of this as art."

When asked what he would like to photograph today, Güler elfishly replied, "I want to take a picture of the Ebola virus."

According to the legendary photographer, the perfect photograph has never been taken. "There is no art piece that has reached perfection. There is no best," he said. "The best will always be in the future. To reach the best is like to reach the deity."

He showed a photo of himself taken by American photographer Imogen Cunningham (1883-1976). "I am proud of this picture. She catches my thinking moment," he said in an unusual moment of demonstrative satisfaction. It is a frontal picture of the photographer. He was holding a camera in his right hand; his index finger barring his lips seemed to gesture a "shush" as to encapsulate the silence. He was not looking at the camera. Instead, his eyes were focused on something beyond the photographer.

The more Güler talked, the more animated he became; the more passion reclaimed him. But the dialysis and the disease it seeks to treat serves as constant anchors back to reality. "Either you have to live like this from now on or there is only one expedience: One day you will pull a bullet into a weapon and shoot the gun at your head. There is no other remedy," he said.

But the man who began the interview by saying that he was fed up with taking pictures remains a photographer at heart. "How is your camera? Is it any good?" he asked the Anadolu Agency photographer.
Last Update: Apr 13, 2015 11:12 pm
RELATED TOPICS