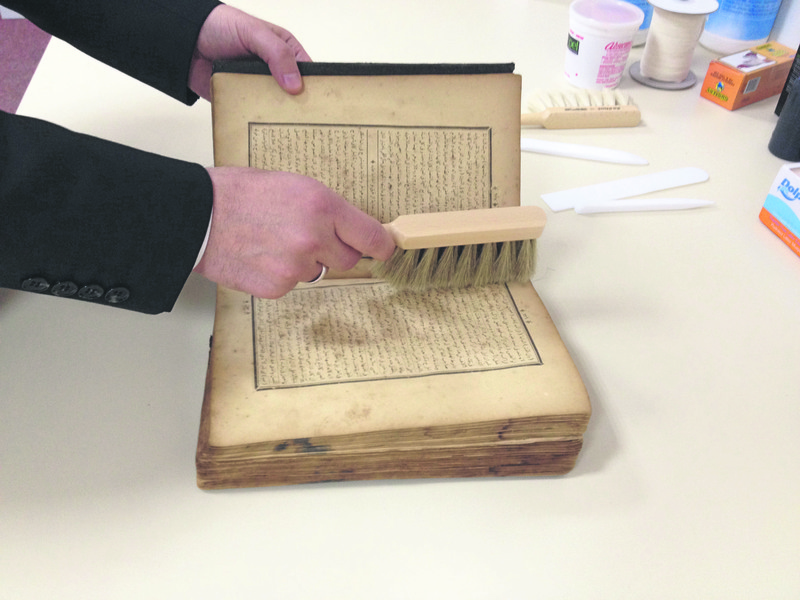 by Zeynep Esra İstanbullu Apr 13, 2015 12:00 am
The project entitled "Kosovo Inscriptions," which was undertaken by the Yunus Emre Institute to contribute both to the history of Turkey and Kosovo, has been finalized. Written in Ottoman Turkish, the inscriptions of the historical constructions in Kosovo, which is home to many architectural works of art dating to the Ottoman period, were translated into present day Turkish as well as Albanian, Bosnian and English for domestic and international visitors to gain a better understanding of the works. Thanks to this project, which includes hanging signboards regarding the meanings of the inscriptions, the identities of these distinguished buildings are being brought to light.

Many architectural works of art in Kosovo including mosques, dervish lodges, tombs, public baths, bridges, clock towers and fountains date back to the Ottoman period. With the translations of the inscriptions of these buildings, a huge cultural accumulation has been revealed. Various temples and charity buildings have been constructed in this region, which is not just home to Muslims, but also to many beliefs and ethnic origins. Hence, the inscriptions on these buildings actually reveal information about the era they were written, its history, culture and aesthetic tastes.

While some of these inscriptions are the only source about the building they are connected to, some appeal to eye with the most beautiful examples of calligraphy, as well as appealing to the heart with their literary style. However, the harsh truth is that they could not be read by many people. With the "Kosovo Inscriptions" project, the Yunus Emre Institute aimed to draw attention to these historical buildings that appeal to the eye and the heart with their beauty and grace, and take people on a journey along the streets of a civilization that was embroidered with different cultures and which destroys all prejudices caused by ignorance.

As the project has been finalized, now people can learn more about the civilization and history of the constructions that they pass by every day, live in, pray in, lean against and drink from their waters. Within the scope of the project, experts carried out studies on every standing Ottoman buildings and their inscriptions. The new signboards in present-day Turkish, Albanian, Bosnian and English enable the founders of these buildings to receive praise from people all over the world. The inscriptions tell the history as well as present visions of the remains of a great civilization to people with different languages and religions.

s at its best. Sponsored by the Central Bank of the Republic of Turkey and Turkey's Ministry of Development, the project intends to protect and introduce rare and valuable manuscripts found in the Balkans to the scientific world by transferring them onto the digital platform. As part of the project, manuscripts in Bosnia and Herzegovina, Croatia and Macedonia were digitized, and the Institute undertook this huge project between August and September 2014. Within the scope of the project, which has enabled the digitizing of 10,000 manuscripts and 5,000 printed works so far, over 1,000 manuscripts in Ottoman Turkish, Arabic and Farsi which were found in Republic of Kosovo Islamic Unity, Kosovo State Archive, Yakova Sheik Said Lodge and the Monument Preservation Foundation affiliated to the Kosovo Ministry of Culture, Youth and Sports. The cataloging of the scanned works still continues.

Moreover, the Institute works to improve local capacity as a part of the project. In this context, a digitizing set was donated to Islamic Unity in Kosovo which is in possession of thousands of unique manuscripts and printed works. As most of the works have been destroyed for various reasons over the years, the written works requires urgent scientific restoration. Thanks to the Yunus Emre Institution, a "Manuscript Restoration Workshop" was established in Kosovo Islamic Unity. The workshop, which features all kinds of tools for the restoration of historical documents, will not only be used to restore the documents from the Islamic Unity, but also other manuscripts belonging to various instructions and people.

The inauguration of the library, which was established under the supervision of Nevzat Kaya who is the retired manager of the Manuscript Institution of Turkey's Süleymaniye Manuscript Library, took place on April 9.