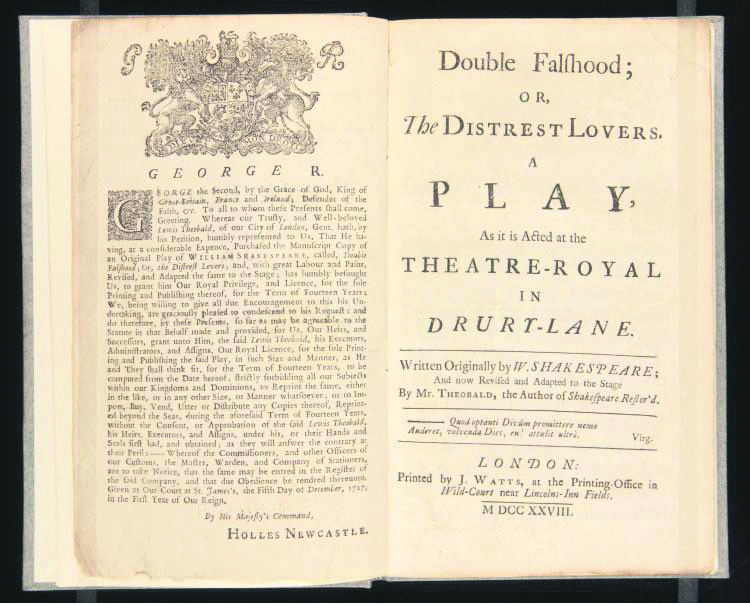 A play called "Double Falsehood" published in 1728 by a man who claimed it was based on a lost Shakespeare play but has long been dismissed as a forgery may indeed be the real deal.

University of Texas researchers have unveiled a sophisticated new study of "Double Falsehood" that used text-analyzing software that helped create a "psychological signature" of the playwright.

"I am quite confident that Shakespeare had a direct hand in writing 'Double Falsehood.' Put me down for 97 percent confident," University of Texas social psychologist James Pennebaker, co-author of the study published in the journal Psychological Science, said on Friday. "Double Falsehood" was published by Shakespeare expert Lewis Theobald, who said it was based on Shakespearean manuscripts later destroyed in a fire. Many experts considered it an original work by Theobald that he sought to pass off as Shakespearean. The lost play is thought to be "The History of Cardenio." Recent scholarship has reopened the debate. In 2010, Nottingham University literary expert Brean Hammond said he was convinced the play was Shakespearean.

Pennebaker and fellow University of Texas social psychologist Ryan Boyd examined 33 Shakespearean plays, 12 by Theobald and nine by John Fletcher, Shakespeare's occasional collaborator. The texts were scrutinized for the use of pronouns, articles and prepositions, words relating to emotions, family, sensory perception and religion and other qualities.

In doing so, the researchers formulated a psychological signature for each author.

"Really, there's just very, very little similarity to Theobald to the point that it is practically impossible that he wrote it," Boyd said. Pennebaker noted that Theobald was considered to be "orderly, structured, detailed and rigid" and his language matched that profile. "The writing of 'Double Falsehood' suggested that the author was reasonably sociable, more relaxed, and educated, someone like Shakespeare," Pennebaker added. Boyd suspects this is not the final word on the matter. "One thing I can say for sure is that I don't think any amount of evidence is going to stop people from debating about who actually wrote it. That being said, I think this is pretty convincing," Boyd said.
Last Update: Apr 13, 2015 11:52 pm