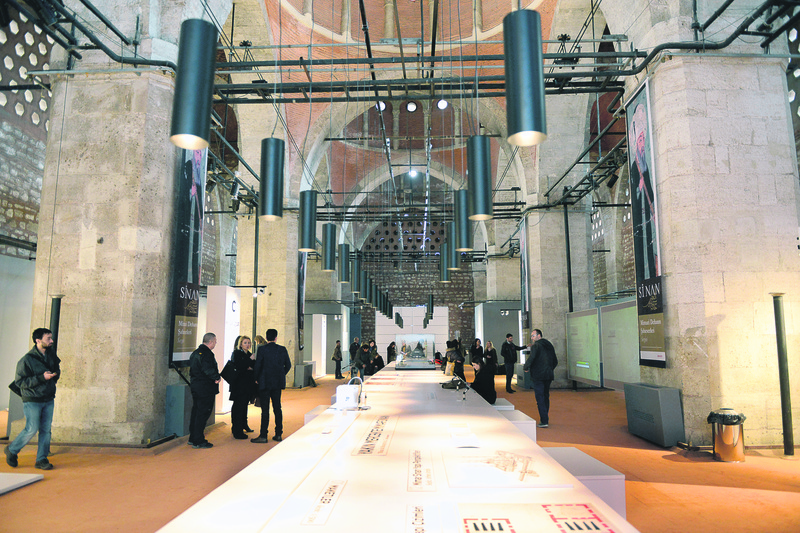 by Zeynep Esra İstanbullu Apr 14, 2015 12:00 am
The symbol of Turkish architectural history, Mimar Sinan - who introduced his unique designs not only to the Ottomans but also to the world - is being commemorated on the 427th anniversary of his death with an exhibition entitled 'Sinan and Masterpieces of the Creative Genius'

Co-organized by the Department of Interior Architecture at Mimar Sinan Fine Arts University (MSGSÜ) and the Mimar Sinan Research and Application Center, the exhibition "Sinan and Masterpieces of the Creative Genius." which is the most comprehensive display using multimedia, opened on Friday and will run until May 31 at the MSGSÜ Tophane-i Amire Culture and Art Center. Following the display in Istanbul, the exhibition will be held in different parts of Turkey as well as tour around the world. The designs and applications featured in the exhibition were created by Awesome Broductions.

"Sinan and Masterpieces of the Creative Genius" analyses Sinan as an architect, town planner, engineer and organizer, while examining the social, cultural and architectural environment of the period that established a foundation for his outstanding design and artistic skills, as well as his teamwork in the "Hassa Mimarlar Ocağı," which refers to the association of architects affiliated with the Ottoman court. The display also presents an enchanting life story of Sinan, blending it with other outstanding figures of the period and their life stories.

The exhibition, which reveals his story as well as other interesting and unknown stories with modern narration beyond the ordinary presentation, aims to reach out to visitors of different ages, knowledge levels and professions by introducing Sinan as an engineering and architectural genius through his interaction with the era and the region he lived in, as well as his relationship with his patron, the Ottoman court. "Sinan and Masterpieces of the Creative Genius" offers a wide-range of multi-technological and multimedia displays from 3-D images, animations and digital maps, to touch screens and interactive displays. Visitors will be able to learn more about Sinan through boards, digital screenings and headphones with the voice of Can Gürzap.

The display, which features tables for researchers, experts and students to study, takes its visitors on a journey through the 16th century with word and dictionary games, miniatures animating the century's construction phases, paintings and music.

The exhibition is being held at the 2,000-square-meter exhibition hall of Tophane-i Amire, which was built in the 15th century. The life and works of the master architect, who has been a source of inspiration to architects all over the world, will be showcased under different titles and sections.

This section offers a general look at the life of the architectural genius and the things that made him Mimar Sinan. Contrary to common belief, this section introduces the architect, his architectural genius and his works with his own words from different point of views and locations. The viewers will be able to read selected parts from his autobiography on interactive screens, listen to different sides of his sophisticated genius, observe different views and perspectives on a single screen and watch animation films centered on the myths about Sinan.

The "Cultural Interactions" section enables visitors to view the great architect with fresh eyes through his interaction with the area he lived in and the culture he was part of. It examines Sinan and his works through his past and the century he lived in, as well as compares it to other cultures that flourished at that time. The section aims to show viewers the effects of the past and the environment on architectural works by comparing Sinan to his contemporary Palladio, as well as to Istanbul and Venice on a detailed chart. This section, which also offers a look into eastern, Western and Ottoman history and art, has sub-sections such as Sinan's competition with the Hagia Sophia's unique architecture, which features photographs and interesting information.

Offering solutions to the cultural, geographic, religious and structural style codes in Sinan's works, this section provides insight into the rules that influenced architecture and how the social fabric formed the religious structures through light pyramids, drawings, maps, and dubbing. 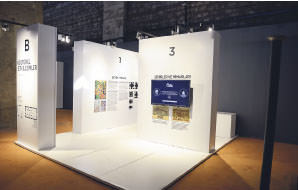 In this section, visitors are introduced to the patrons and their sponsorship processes. Patrons were the most important element that helped great architects flourish. "Patrons and Mimar Sinan" investigates the patrons' relationship with the chief architect of the empire and the architectural works that were formed according to their social status. The visitors are able to listen to the stories behind the architectural works as well as learn about the status of women at that time and the stories of women patrons through illustrations.

Viewers have a chance to learn about Sinan and his relationship with the Hassa Mimarlar Ocağı. This section reveals that architecture and urban planning requires teamwork and collaborations, and details how this collaboration was handled in the Hassa Mimarlar Ocağı. The display opens the doors of the 16th century's architectural world with Sinan's colleagues, masters and their apprentices, the construction process as well as the relationship between this process and state mechanisms through animated miniatures and projections.

'Sinan through Maps and Silhouettes'

"Sinan through Maps and Silhouettes" offers viewers a presentation composed of city gravures of Istanbul's silhouettes, which can be divided into three: Before Sinan, after Sinan and present day. It also displays photographs to impart a better understanding of Istanbul's architecture. Moreover, it is possible to see Sinan's new understanding of urban planning, which reflects the glory of the period, and is in accordance with the city's topography and landscape through images. This section takes visitors on a journey through the centuries and allows them to witness how the imperial capital changed over time with maps, gravures, paintings, music and poems.

This section of the exhibition features word plays with the architectural and cultural terminology of the period, as well as questions and puzzles.

'Mimar Sinan: Under the Microscope'

"Mimar Sinan: Under the Microscope," is a section that has been prepared for those wanting to study Sinan professionally, offering the complete works and autobiography of the architect along with assignments given at the Hassa Mimarlar Ocağı, payment tables, sketches, plans, gravures and photographs of his buildings on a huge 28-meter table through lenses, screens and catalogues.

The construction phases of the domes in Mimar Sinan's works are projected onto the dome of MSGSÜ Tophane-i Amire via 3-D video mapping in 3-D.

Other features of the exhibition

Moreover, the screening of the documentary film "5 Asır Sonra Sinan'ın Minarelerinden 4 Mevsim Istanbul" (Four Seasons in Istanbul from the Minarets of Sinan after Five Centuries), which was produced and directed by Cüneyt Karaahmetoğlu, will be screened. The documentary, shot with the sponsorship of Sony, is a 16-minute time lapse composed of films recorded from the minarets built by Sinan over 12 months. A total of 170,000 photographs of Istanbul were taken for the film and 21,000 of them were used in the documentary.

Other events connected to the exhibition will include conferences, concerts, tours and company launches, which will be held in parallel to support the exhibition and help keep the memory of Sinan alive in Istanbul. A shop featuring publications on the chief architect of the Ottoman Empire and special objects inspired by Sinan's masterpieces will also offer its services and products during the exhibition.
Last Update: Apr 14, 2015 11:29 pm
RELATED TOPICS