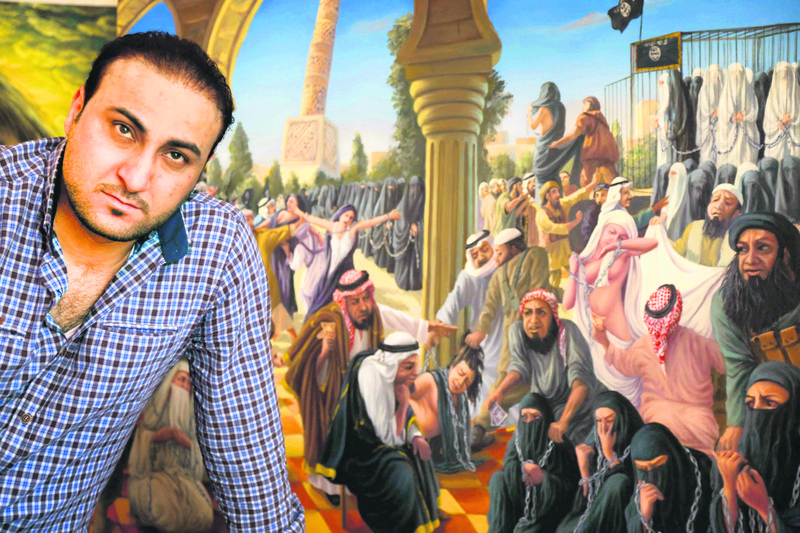 The painter portrays the ISIS's executions of Yazidis through his art, naming his works "Yazidi Massacre." Salim was living in Mosul before ISIS attacked, but was forced to move to Duhok, a city affiliated to the Kurdistan Regional Government, after the terrorist organization took control of the city. Salim's paintings display a sorrow that is beyond what has been reported. Expressing his desire to show people what is really happening in his country, the artist said, "Many people fight with their guns, pencils or reports, but I fight with my art."

The paintings portray militants putting knives to people's throats whether they are men, women, children or elderly in a crowded market place, and are reminiscent of the depictions of hell in Renaissance paintings. In one of his paintings, Salim describes the tragedy of women who are raped and sold as slaves. These incidents were echoed in the international media and increased the anger toward ISIS. The artist said that he has been interested in painting since he was little and he used to own an art gallery. Salim used to draw cartoons such as Mickey Mouse and Popeye for children's plays, but explained that he lost everything when ISIS tore the city down. The Kurdish painter's "Yazidi Massacre" pieces are not his only tragic works. The artist previously drew a painting portraying the Al-Anfal Massacre, which was carried out by Saddam Hussein to eliminate the Kurdish population in Iraq. During the Al-Anfal Massacre that took place 27 years ago, 182,000 civilians died and over 5,000 villages were destroyed.
Last Update: Apr 15, 2015 10:37 pm
RELATED TOPICS