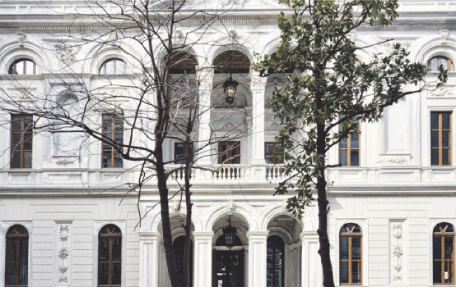 by Arda Sayıner Apr 19, 2015 12:00 am
I found a chance to visit Soho House, which opened in Pera, Beyoğlu, this week. The brand value of the building is notably high due to its architectural structure, location, the fact that it was once used as the American consulate and the mystery stemmed from it being closed for a long time. That's why it deserves to host the prestigious American brand, Soho House, to the full extent. As soon as you step into the building, which is dark during the day but dimly lit at night, you are welcomed warmly by a professional team. The staff is far from the exaggerated care and extreme chicness as in other Soho Houses as well.

Frankly speaking, it was surprising for me to not find the vintage member registration book, which is as big as the sorcery book of "Harry Potter" that reflects the history, antiquity and the traditional culture of the original New York Soho House at the entrance of the club in Istanbul. Likewise, I browsed the menu looking for the famous swordfish dish that has appeared on the menu of New York Soho House for many years as the "signature dish" of the club, which adds more value to its brand. As well as the local delicacies, the menu also contains famous American dishes such as macaroni and cheese.

The neo-classical embroideries on the ceiling of the main building and the velvet decoration of the private theater room in the hotel building deserve applause. Soho House, created by Serdar Bilgili as a gift to Istanbul, seems like it will give a new impulse to the social life of the city with its architecture, halls as silent as a library and its international population including expats. Soho House is very similar to the buildings in Europe which we see on our travels and think, "Why we don't have such buildings in Turkey?" It gives a kiss of life to the social life of Istanbul, which is about to suffocate in the midst of distorted architecture and similar concepts. We'll see how long the members, managers and employees will abide by the brand value of Soho House, which has world class perception and customer satisfaction abroad.

Last week, I attended a publicity event organized for Çeşme, the town that increases the brand value of İzmir. Inviting us to discover Çeşme with the motto "9 Places, 9 Experiences," this new publicity campaign showed us that there are so many places to discover in the town. During the event organized at the Rahmi Koç Museum, we felt that Çeşme will also remain on the agenda this summer in regards to food and beverage with its gummy ice cream, Turkish shortbread, fig jam and various herbs used for the preparation of vegetarian dishes. If you stop by Alaçatı while you are in Çeşme, I would say that the favorite hotel of this summer will once again be Alavya. The rooms of this boutique hotel are designed in accordance with the concept of Alaçatı houses, and are ideal for people who would like to have a tranquil summer. I would like to congratulate Mayor Muhittin Dalgıç for reviving the branding process of Çeşme, as well as Nur Başnur, the communications and public relations expert, for her support for this process.

Turkish lessons on the Bosporus shore

My favorite place to go when I want to be alone for a while is the Sumahan Hotel on the Bosporus shore. It really is a boutique hotel worthy of the brand value of the Bosporus. The last time I went, I met up with Nedret and Mark Buttler, the owners of this historic hotel - converted from an old "suma" (rakı) factory in Çengelköy, dating back to the Ottoman era - and warmly congratulated them. In the rooms, which are named after the districts on the Bosporus shore, some frequently used Turkish words are written on the shampoo and conditioner bottles in English. The Turkish form of good morning, yes and no welcome you on the bottles of shampoos and other products in the hotel's marble bathrooms. For some reason, many boutique hotels that recently opened in Istanbul are using Molton Brown products as if they have made a collective deal. Therefore, I consider Sumahan's products as a social responsibility project and an appreciable gesture. I complimented the owners on this humble effort to teach even one or two words of Turkish to tourists.
Last Update: Apr 19, 2015 10:29 pm
RELATED TOPICS