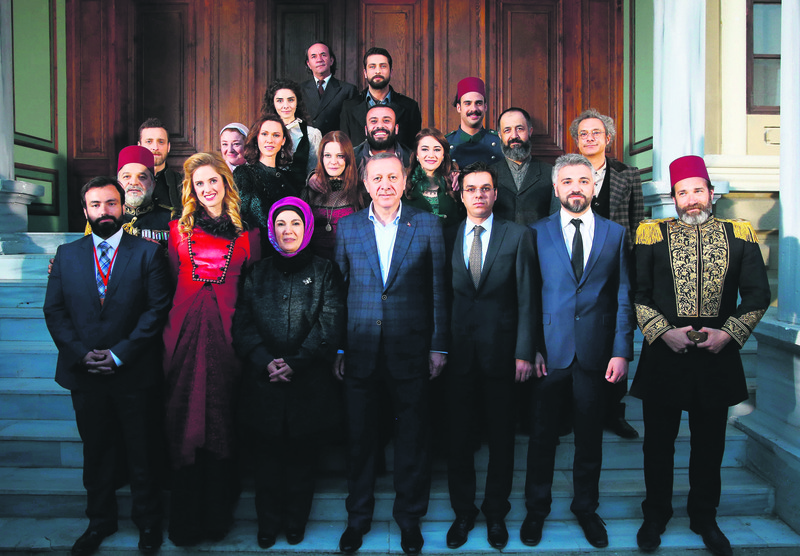 by Anadolu Agency Apr 19, 2015 12:00 am
President Recep Tayyip Erdoğan and his wife Emine Erdoğan visited the set of popular Turkish TV series "Filinta" in Kocaeli and commenced the shooting. Video recordings of the president's visit have been released through the media.

As seen in the videos, the president and his wife were welcomed amid applauses by the actors who were present in their costumes. Following a small chat with the cast of the TV series, President Erdoğan and Emine Erdoğan were presented various gifts by the actors and the production team. Erdoğan congratulated the actors by saying, "I wish the continuity of your success. I hope you have run the ratings upside down. You have, haven't you?"

The president sat down in the director's chair following a souvenir photo with the cast and commenced the shooting of one of the episodes of the series after the director of the series gave him tips about filming. Erdoğan followed the shoot from the monitor and ended it by saying "cut." The president who was applauded by the production team and cast members right after filming ended, reminded that the old SEKA Paper Factory was gifted to Kocaeli during his prime ministry. 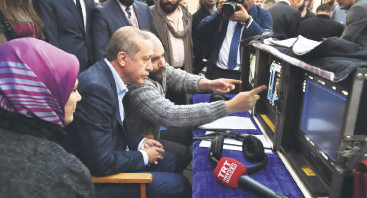 "We struggled for SEKA back then. There were many people who want to hinder us. SEKA Paper Factory was losing a lot of money. Why should we continue to subsidize a factory which is not making any profit?" Erdoğan said. He noted that the private sector is currently manufacturing paper. He continued to say: "Why should we keep producing paper although we lose money? We proposed to gift this factory to the people of Kocaeli and convert it to a museum." He stated that they visited the Science and Art Center whose building once belonged to SEKA and added: "This is not what we contemplated but now this place is home to film studios. Turkey lacked such comprehensive studios but we have stepped into the industry in the old building of the SEKA Paper Factory." Erdoğan also pointed out that "Diriliş" (Resurrection), another TV series by Turkish Radio and Television Corporation (TRT) is filmed in the area and said some people contacted them to build huge film studios in Turkey; however, nobody has made an official application yet. President Erdoğan congratulated the production team and the TRT administration and said, "The TV series and programs broadcasted by TRT break rating records and become the most watched programs throughout Turkey." He noted that TRT or any other state institution have never been so successful. "You [the production team of the TV Series and TRT officials] made this happen. I would like to congratulate you and wish continued success."

Upon a question, Erdoğan drew attention that the film studio re-animates the Ottoman era and said, "There is originality, you see that. First of all, it is a huge success in terms of setting. Moreover, the costumes that the cast members wear during the filming are of high quality. I congratulate the designers for that." He noted that he really enjoys watching the acting in the TV series and underscored that the director has a big role in the success of the series as well as the actors. He also complimented on the scriptwriter of the series and continued, "I believe that producers should be filming such TV series and should continue with courage." Family and Social Policies Minister Ayşenur İslam, Science, Industry and Technology Minister Nihat Ergün and Youth and Sports Minister Akif Çağatay Kılıç accompanied the president during his visit.
Last Update: Apr 20, 2015 12:12 am
RELATED TOPICS