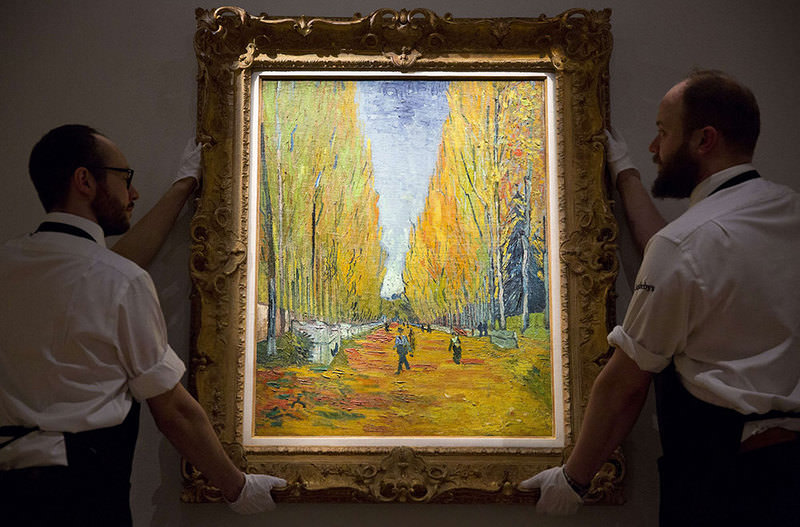 by Daily Sabah May 10, 2015 12:00 am
A Vincent Van Gogh painting fetched more than $66 million at a New York auction on Tuesday, the most paid for a work by the Dutch post-impressionist artist since 1998.

According to the Sotheby's auction firm, Van Gogh's "Les Alyscamps," which depicts a stand of autumnal trees, had been expected to go for around $40 million but ultimately an Asian collector paid $66.3 million after an intense bidding war between five potential buyers.

Also reaching the pricing stratosphere was a "Water Lilies" painting by French impressionist Claude Monet, which sold for $54 million, smashing Sotheby's valuation of between $30 million and $45 million.

Of the six Monet works offered at auction, "Le Palais Ducal," painted in Venice in 1908, went under the hammer for $23.1 million, more than its estimated $15 million to $20 million.

And his "Bassin aux nympheas, les rosiers" sold for $20.4 million. The two other Monet paintings found no buyer.

Tuesday's sale of impressionist and contemporary works marks the start of auction season in the Big Apple.

Pablo Picasso's colorful "The Women of Algiers (Version 0)," depicting a scene from a harem, will be up for grabs when Christie's puts it on the auction block May 11.

The artwork has been valued at $140 million.

The world record for a painting sold at auction is $142.4 million for Francis Bacon's "Three Studies of Lucian Freud," which was snapped up in New York in 2013.

Giacometti holds the record for "Walking Man I," which sold for $104.3 million.