German artist moves from art to the world of science 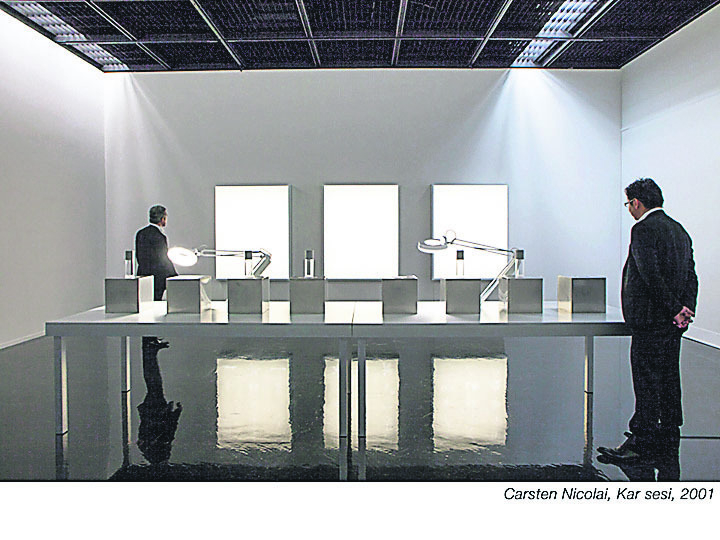 Lying on the European shore of the Bosporus Strait, Perili Köşk (Haunted Mansion) invites visitors to experience everyday natural phenomena through scientific models. Serving as contemporary art space at the Borusan Holding, this historic castle-like red-brick mansion has been turned into a science laboratory at Berlin-based artist Carsten Nicolai's exhibition "Strange Attractors," which runs until Aug. 23.

Covered with epoxy coating, the exhibition venue encourages viewers to understand common environmental elements like snow crystals, clouds, radiation and frequencies, whose formations are difficult to perceive. Kicked off on April 4, the artist's solo exhibition is curated by Kathleen Forde, the artistic director at large at Borusan Contemporary. Opening a door to the hidden world of psychical powers, "Strange Attractors" is featured in five different sections - "Thermic," "Future Past Perfect Series," "Snow Noise," "Ayoma spaces" and "Particle noise."

Nicolai's first work makes heat waves visible for viewers. The fluctuations of air generated from a heat source can be seen through a light spot throwing the shadows of it onto the wall. As suggested in the exhibition catalogue, viewers "are not surrounded by empty space but by a physically flexible matter."

This short film series is inspired from the movements and limitless variety of clouds. Shot from a plane on different trips, the series shows the different forms and behaviors of clouds. One sequence from the Future Past Perfect Series is a recently commissioned work for the Borusan Contemporary Art Center introducing shots from Istanbul.

Eight cooling units are installed to cool down glass cylinders to a temperature of minus 25 degrees Celsius. When viewers enter into the laboratory-like space, they begin to experience the growing process of a snow crystal. This section systematically explores the variety of snow crystals with the help of a diagram allowing visitors to identify individual crystal structures. A subtle light and the noise of snow are what make these microstructures the center of our attention. To form this installation, Nicolai uses acrylic tubes, polystyrene boxes, magnifying lamps, noise generators and steel tables.

This section derives its name from a photo studio in Tokyo's Aoyama district, which has a room without edges, creating an atmosphere of endless space. Nicolai's works under the name of "aoyama spaces" are reduced-size models of similar room installations. The artist urges visitors to explore spatial irritation through radical structures with complex characteristics.

The next installation explores the rate of natural radiation through sound. Two Geiger counters - one analog and one digital - measures the level of radiation in the exhibition space. More explicitly, the installation turns radiation into sound and records it. Particle noise "is yet another example of a work shifting otherwise unnoticeable phenomena on a perceivable level allowing invisible radiation signals that occur in nature to become an audible soundtrack of our surrounding terrestrial and extraterrestrial environment," the exhibition catalogue further informs. Nicolai's works might seem rather complex and hard to understand, but he is largely influenced by scientific reference systems and mathematical codes. Born in Karl-Marx-Stadt, the 50-year-old artist has participated in important international exhibitions including the 49th and 50th editions of Venice Biennale. He introduced his audio visual works at the Solomon R. Guggenheim Museum in New York, San Francisco Museum of Modern Art and Tate Modern in London and Kuntshaus Graz. Nicolai also conducts multiple projects with international artists like Ryuichi Sakamoto, Michael Nyman and Mika Vainio.
Last Update: May 12, 2015 11:37 pm
RELATED TOPICS