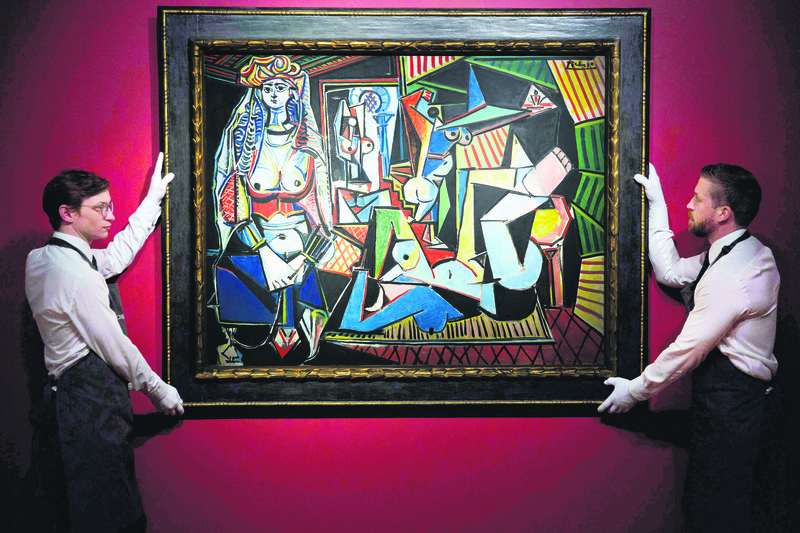 by reuters
May 12, 2015 12:00 am
A Picasso oil painting from 1955 smashed the record for the most expensive artwork ever sold at auction when it soared to $179.4 million at Christie's on Monday. The auction house had estimated "Les femmes d'Alger (Version 'O')" would sell for about $140 million, but several bidders competing via telephone drove the winning bid to $160 million, for a final price of $179,365,000 including Christie's commission of just over 12 percent.

The buyer of the vibrant cubist work was not identified. The most expensive work of art previously sold at auction had been Francis Bacon's triptych "Three Studies of Lucian Freud," which sold for $142.4 million at Christie's in November 2013. "It will be fascinating to see how long it holds," Jussi Pylkkanen, Christie's global president who also served as auctioneer, said of the record price. Giacometti's 1947 sculpture, "L'homme au doigt" (Pointing man), set a world record for a sculpture, selling for $141.3 million, in line with the pre-sale estimate of about $130 million. The previous record of $104.3 million had been held by Giacometti's "L'Homme qui marche I" since 2010.

Ten artists' records were set at Christie's special "Looking Forward to the Past" sale, which spanned collecting categories to include artists from Monet to Warhol and took in a total of $705.9 million, far above the pre-sale estimate of $578 million to $668 million. Only one of the 35 works failed to sell. "The results really speak for themselves," Pylkkanen said.

The record-setting Picasso was last auctioned in 1997, selling for $31.9 million or nearly three times its pre-sale estimate. Bidding started this time at $100 million, with deep-pocketed collectors driving the price upward in $1 million increments. "We saw tremendous competition, with five major collectors bidding at the $120 million level," said Pylkkanen. "The market has certainly changed dramatically." Christie's said active bidders came from 35 countries, with European and Asian collectors in particular competing with Americans for the top-tier works. Among other highlights, another Picasso, "Buste de femme (Femme a la resille)", fetched $67.4 million, beating the high estimate of $55 million. Mark Rothko's "No. 36 (Black Stripe)" and Monet's "Le Parlement" each sold for $40.5 million.

Artist records were set for Chaim Soutine, Peter Doig and Jean Dubuffet, whose "Paris Polka" fetched $24.8 million, more than tripling the old mark. The auctions continue on Tuesday, when Sotheby's holds its sale of post-war and contemporary art.
Last Update: May 12, 2015 10:33 pm