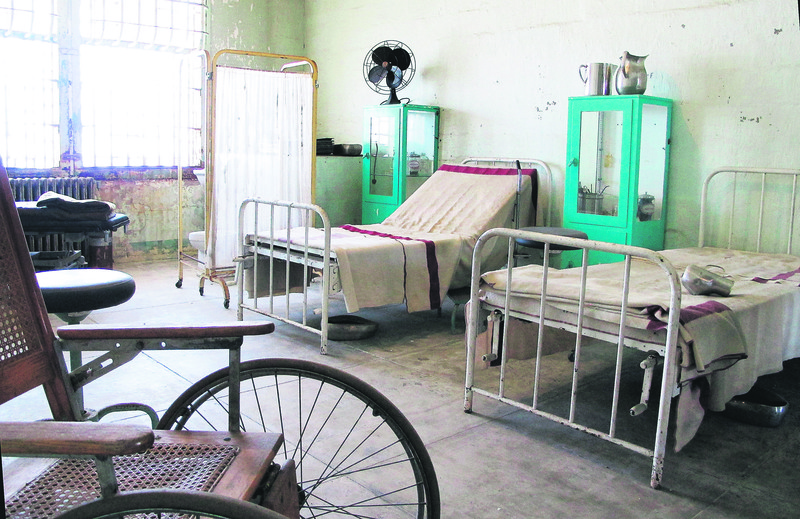 Visitors begin to discover the prison from the section where inmates used to receive navy blue uniforms that they were forced to wear for years, and the bathroom where they all showered together.
by Anadolu Agency May 12, 2015 12:00 am

Situated in San Francisco Bay, Alcatraz Island is once the site of one of the world's most notorious prisons for trouble-making inmates. After it closed it was converted into a museum

When Spanish traveler Juan Manuel de Ayala landed on a small island in 1775, he could have had no idea that the island would be subject to more than 20 films and would welcome tourists from around the world.

Alcatraz is one of the three islands off the coast of San Francisco, California, and is the most visited. Spread across a nine hectare area, it is 2.5 kilometers from San Francisco Bay. Visitors eager to see this little island, which gained global fame with films like "Birdman of Alcatraz" and "Escape from Alcatraz," wait in a ticket line while familiarizing themselves with its famous prison, Alcatraz Federal Penitentiary, now a museum, through a model.

The ticket for a tour of Alcatraz is $30. The boat carrying visitors crashes through the waves and brings them close to the prison island, which was once famous for boasting that nobody could escape from it. Following half an hour's journey by boat, visitors are welcomed by "1259," a true life account by William G. Baker, one of the former inmates. The prison was the mandatory residence for troublemakers who did not follow the rules in federal prisons and most importantly, those who attempted to escape. Furthermore, they were addressed by numbers instead of names.

Visitors begin to discover Alcatraz, also known as "The Rock," from the section where inmates used to receive navy blue uniforms that they were forced to wear for years, and the bathroom where they all showered together.

The headphones provided to visitors take them back to the painful years of Alcatraz's dangerous residents. The voices of surviving inmates, which have been translated into 11 languages, explain how inmates lived and what they experienced in their small world surrounded by prison bars. Visitors to the famous prison walk around the water storage tanks, observation tower, hospital and dining hall, and feel a shiver down in their spine.

The island is said to have been inescapable, as it is surrounded by sharks, cold water and the wild currents of San Francisco Bay. Indeed, it looks like a slave camp due to its living conditions. Throughout its 100-year history, the prison hosted such infamous criminals as Al Capone, Arthur Barker (generally known as "Doc"), George Kelly (also known as "Machine Gun Kelly") and Robert Franklin Stroud (better known as "Birdman" or "The Birdman of Alcatraz").

It is reported that eight inmates died during a fight while five prisoners committed suicide and 15 prisoners died due to various other reasons. Additionally, 34 inmates tried to escape from the prison, with only five of them reportedly succeeding. The escape of three inmates - Frank Morris and John and Clarence Anglin - is probably the most popular story. They escaped from the prison by boring a hole under the sink with a spoon on June 11, 1962. They became even more famous when Clint Eastwood brought their successful escape to the big screen with the movie "Escape from Alcatraz" in 1979. Special drawings and mannequins describe the brothers' escape story in more detail for visitors.

Just like in the hit TV series "Prison Break," the inmates opened a hole in the wall and climbed up into the ventilation ducts. They then reached the roof by bending iron sticks and disappeared after they came down through water pipes. When they disappeared, only the models made of their hair were left on their beds.

Even today, nobody knows what happened to Morris and the Anglin brothers. Their names are among the five inmates who were considered as "missing or drowned while attempting to escape." Afterwards, the high security prison, which hosted 1,578 inmates throughout its 100-year history, was shut down in 1963 because the building was old and its renovation costs would have been too great. The island, which was used as a cultural center by indigenous people for some time, was then opened to visitors in 1973, and greatly contributes to San Francisco's tourism revenue. Turkish tourists can also easily travel to the city to visit the prison, as direct flights from Istanbul to San Francisco via Turkish Airlines were launched about a month ago.
Last Update: May 12, 2015 10:34 pm
RELATED TOPICS